about 1stdibs at the New York Design Center. 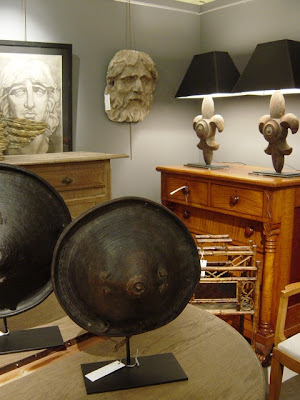 It was one hot ticket: the opening night party to launch 1stdibs at the New York Design Center (1stdibs@NYDC). It was DJ’ed, cater-waitered and star-studded… Amy Lau, Vicente Wolf, Mario Buatta, Alexa Hampton, Charlotte Moss, Joan and Jayne Michaels, Matthew White, Scott Salvator, Christopher Coleman, Robert Passal, Carl Lana, Noel Jeffrey… to name-drop but a few of the many. The halls were packed, the energy palpable, the music pumping, the invite list cut off at least a full week before the event, at a whopping (and building-unprecedented) 2500 lucky guests. 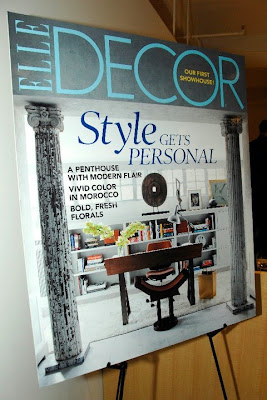 Photo: New York Design Center
Why such a buzz? Partly, it was the sponsorship by ELLE Décor and a chance to glad-hand new(ish) editor Michael Boodro, whose upcoming April issue will bear his full stamp. But mostly, it was the Midas touch of that other Michael, 1stdibs Founder Michael Bruno, whose name alone gets people to show up, pony up, and attempt to weather a recession underneath his apparently water-tight umbrella. With his Clark Kent good looks, he’s become the interior design community’s new superman. 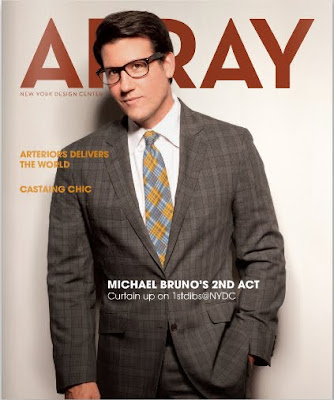 Very few besides Bruno could get such press, reception and response to the announcement that an online venture was setting up shop, brick-and-mortar. This reversal of trend is seemingly a non-event in the .com and app-driven world, especially as the industry leans more heavily on internet trade. But no, this somehow was big news, and Bruno was the man of the hour, the 54 lucky proprietors (competition was so fierce the NYDC enlisted a lottery system to dole out spaces) basking in Bruno’s golden glow on opening night.

At the party, there was giddy chatter about how “revolutionary the concept.” Perhaps bringing multiple antiques dealers under one roof (and brand) in an existing trade-only design center is newfangled, but consolidated antiques sales by multiple dealers is not a brand new concept. Just ask the dealers at, and folks behind, the not-too-distant Center 44, a venerable and well-marketed antiques center in Manhattan, one example of many that probably wonder what the hoopla is all about. One respected independent dealer not part of 1stdibs@NYDC agrees: “1stdibs’ space at NYDC is just another antique mall,” he says. He also thinks the highly curated and extremely tasteful displays (something that does set the 10th floor apart from some other dusty, crowded antiques malls) are gorgeous now, but wonders what will happen when the reality of square-footage to sales ratios start to register. “I bet that within 6 months they start getting a little desperate and start cramming stuff in.” 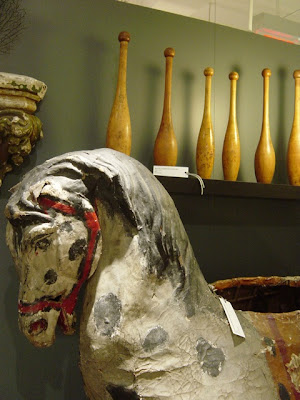 The whopping 33,000 square foot space is airy, stunning, shiny and new, now, no argument, but it seems more gallery or installation than a high-powered retail concept, leading to some visitor confusion. In fact, Tyler Doran of Providence, Rhode Island's HEIR Antiques said, “People were asking how long ‘the show’ was going to be up, so I'm not sure people realize it is a permanent fixture within the NYDC.”

Permanent, yes, but apparently the building hopes the merchandise turnover will maintain the opening night energy (where lots of “Sold” and “Hold” tags were scattered about on furniture and accessories before the last wine was poured), and they’ve apparently built in turnover, with short term leases to keep the curious coming back, as merchandise, and vendors, change. 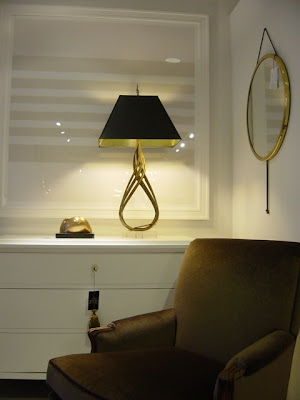 Dealers with big names and storefronts elsewhere in Manhattan have also chosen to board the 1stdibs train… Wyeth, Mariette Himes Gomez’ “The Shop,” Hostler Burrows, and Patrick Parrish's and Greg Wooten's Mondo Cane among them. They’re perhaps banking that visitors will be tempted enough by these small tastes of their wares to venture elsewhere in town to sample the full buffet. All these vendors could have joined the NYDC roster before… but chose to do so only when 1stdibs announced its upcoming presence. But that’s the power of Bruno. 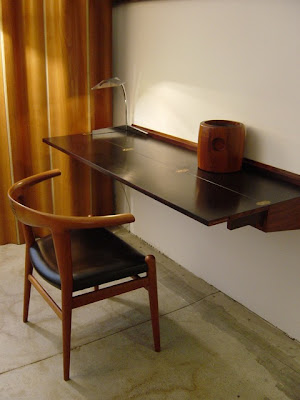 WYETH
Larry Weinberg was one vintage pioneer who predated the 1stdibs deal, taking space on the building’s 4th floor for his Weinberg Modern, now represented also on the 1stdibs floor in a small display, a nice way for the rest of the showrooms to leverage 1stdibs traffic, and remind visitors there are 15 more floors to the Design Center worth exploring. “I’m already seeing an uptick in traffic, and a spillover of shoppers since 1stdibs came in to the building,” notes Weinberg, so it seems the touted “express elevator to the 10th floor” is not the only way people find their way in and out of the building. 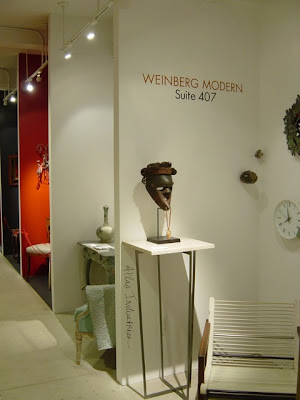 Small bays promote showrooms from the building's other floors, like this display for the 4th floor'sWeinberg Modern

In an article published in 1stdibs own “Introspective” e-zine, Adam Charles Greenberger of Charles Bank Gallery says he would consider standing in line for a booth of his own. “I think fine art in a decorative setting would be great,” he says. Some current vendors on other floors might beg to differ: as much as fine art has seemed a natural fit to high end décor, it’s traditionally been a tough sell in these halls. 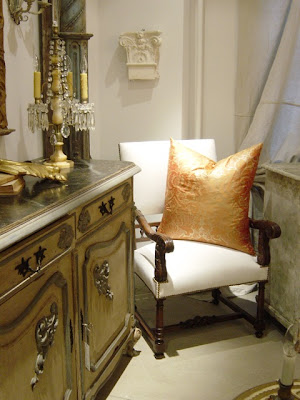 The draw of this deal has also brought dealers from across the country, putting big stock into the dual appeal of a tony Manhattan address and the Bruno touch, including the boy’s club quirk of Doran’s HEIR Antiques, and the sophisticated patina of New Orleans’ Karina Gentinetta disegno. Like the frequent art and antique shows that bring national dealers to New York’s Piers and Armories, the broader perspective brought by these out of towners is a welcome invasion. 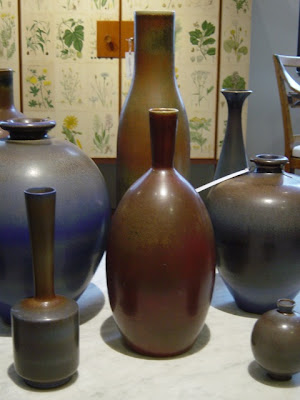 Vintage pottery by Hostler Burrows
Bruno’s original mission was to bring the Paris Flea Market to potential buyers the world over, but the 10th floor is currently more mid-century, industrial quirk and folk art than Clignancourt. No doubt that will change as merchandise turns and eager new vendors come through the doors. The concept of antiques and one-of-a-kind vintage pieces in a largely custom furnishings building also has the potential to jumpstart sales… there is a sense of “now or never” urgency, and gives designers and shoppers some instant gratification in an industry where 12 week lead times are not out of the ordinary. 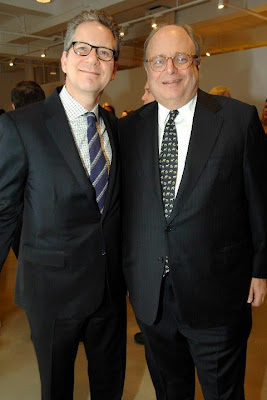 Without stealing Bruno’s thunder, full credit for revolution really goes to Jim Druckman (he owns and runs the NYDC) for sealing the dibs deal and reinventing his building. In doing so, he’s helped reawaken sleepy to-the-trade showroom buildings in the process. That’s where credit for smart, creative thinking fully lies. That’s the reinvention.

But it’s not without risk. Druckman’s gamble here is that this floor, open to the public with or without their designers in tow, will draw an audience that’s never before set foot in “200 Lex,” the nickname given to the NYDC by generations of designers and decorators. Merchandise can be purchased without a designer (but also without their designer discount) from any of the 1stdibs vendors. As far as retail traffic in a trade-only building, Weinberg is a believer. “I can’t think of a business model in this industry that would work right now without a retail component.”

The other hope, no doubt, is that the activity on 10 will trickle down… and up, giving much needed foot traffic, and the energy that comes with it, to the entire building. The building has even added official Saturday hours to this previously Monday through Friday schedule to draw weekend shoppers. But risk or not, Druckman is a happier landlord when these 33,000 square feet are rented out. 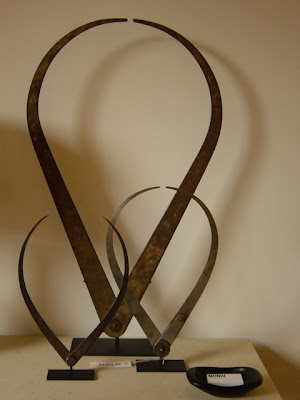 1stdibs@NYDC is still working out how to tell the story to visitors, since 1stdibs has worked so hard to brand itself as an online purveyor. The pieces here are also represented online, in a special section of 1stdibs.com, adding to some of the confusion. In fact, the saleswoman at the desk seemed more eager to show the wares on the website than just steps behind her. Interesting, too, that on 1stdibs@NYDC on 1stdibs.com, the name of the dealer is nowhere to be found... items are listed only as "Available at 1stdibs@NYDC." Call me demanding, but if I were paying Manhattan rent, I'd want my name even on the virtual shingle.

Like the online version of 1stdibs, there is wild range to pricing, and vintage pieces that far exceed licensed re-issues which are still available. Case in point: a Serge Mouille fixture shown here for $8150 is available new for $7810 at re- and e-tailers like SwitchModern. And also like the online 1stdibs, the reputation of the dealers, added to the panache of the 1stdibs name, drive prices up for merchandise you can indeed already buy on eBay for far less, if you look carefully enough. Perhaps that’s the price of shopping one considerable link up the antiques food chain. 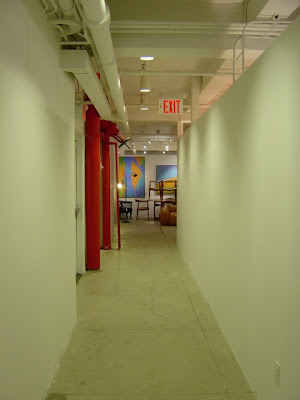 Once the waiters packed up the glasses, the experience on the 10th floor is quite different. Computers replace the champagne flutes at the concierge-style front desk, where a pair of salespeople is on hand to answer questions and (hopefully) close the sale on behalf of the absentee sellers. The dance music is still pumped in, but in this whole-floor space, the crowds are gone, the booths and bays are unattended, and the word “museum” comes more quickly to mind than “store.”

Will shoppers get the difference? Will retail pennypinchers pay more for provenance and the 1stdibs style blessing, or shop the deal online, as they have been doing pretty aggressively since websites like SwitchModern, DesignPublic and HiveModern started up? Will retail be a conflict to the design trade that this building was, well, built for? Will Bruno save the day, leaping into this tall design building in a single, stylish bound? Time will tell. If this is what it takes to get more people into this gem of a trade secret building, great. There’s always been beauty, art and sophisticated tenants here. Now, with 1sdibs as the latest name in a building that already boasts many (Kravet, Baker Knapps & Tubbs, John Saladino, Tucker Robbins, Odegard, Dennis Miler & Associates, and Druckman’s own Profiles, a few examples), maybe their secret is no longer safe. That’s not a bad deal for anyone involved. Thanks, Superman!