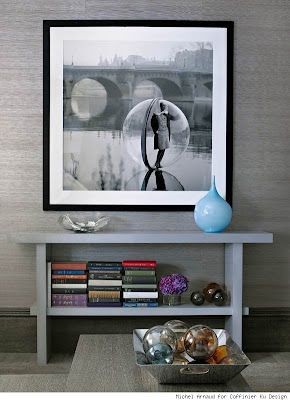 Designer Showhouses intrigue me. I devour every detail, filing ideas away (to be inspired by, never to steal from, of course!!). Even in over-the-top rooms where budgets soar as high as the celestial ceilings, I can find some idea to tuck away, be it color, juxtaposition, or clever use of space.

But as a Designer who aspires to my own Showhouse moment some day, I mostly am intrigued by how designers choose to handle the opportunity. Do they make it a room chock full of their own signature style, pulling a living page from their own portfolio? Do they treat it as the ethereal folly it can be, this temporary space needing no real function, and satisfying no factual or fickle client? Do they use the chance to take a chance… breaking out of their own crayon box to play with more (or less) color than usual? Do they design the rooms to “read” in person, with tactile and subtle choices, for the benefit of those lucky enough to wander the halls (aka, potential clients), or do they go for the big gesture, designed to catch media eyes and reporter’s attention, even at risk of jolting the real-time visitor?

While the 2010 Kips Bay Showhouse may have been dismantled, its rooms still unlock lots of answers… and remain worth another look! 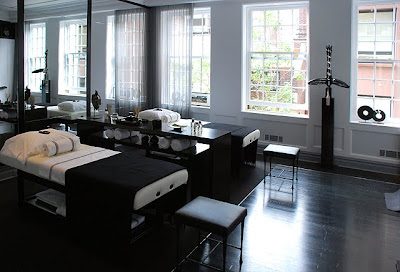 Walking down Park Avenue from the black-tie opening to the Kips Bay Gala Dinner, and during quite civilized pre-dinner cocktails, several of us (Dennis Miller of Dennis Miller Associates, and the terribly-talented two-some, Frank Webb and Matthew White of White Webb, among others) placed gentlemen’s bets on which rooms would garner the most media attention (our version of Fantasy Football!). We agreed on many of the photo-ready frontrunners… the Penthouse suite of spaces from Jennifer Post, certain to gain notice partially for its decadent dedication of a barn-sized (by Manhattan standards) room for two massage tables and a pair of yoga mats, but also for its signature Post luxurious minimalism. And Jennifer’s crisp contrast and gutsy shapes work well in photos. Surely a shoe-in for the NY Times coverage, we all agreed. 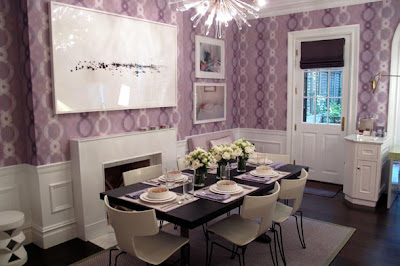 Other rooms we wagered would make the papers? The Fruit-looped Kitchen by Eve Robinson, the poem-in-a-room by 2michaels (more on that, and them, later), the bed-and-bath suite by Coffinier Ku Design (for its theatrical and playful bubble theme, pictured top, if not for the photogenic purple silk sconce shades and ceiling mural, turning a white tiled bathroom into eternal, and eternally flattering, twilight), the ice-blue boudoir of Elizabeth Pyne of McMillen Plus, the mythological His and Her spaces by Darren Henault. 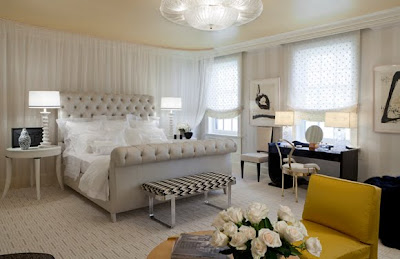 Hollywood Chic Master Bedroom by Noel Jeffrey
Others that were sure to Win, Place, or Show, we guessed, were the dining room of Cullman and Kravis and the close-up ready Master Bedroom of Noel Jeffrey, for its sheer Hollywood glamour dreaminess punctuated by Carol Lombard-esque canary yellow silk.

We were right on most counts. If only we could pick lotto numbers. 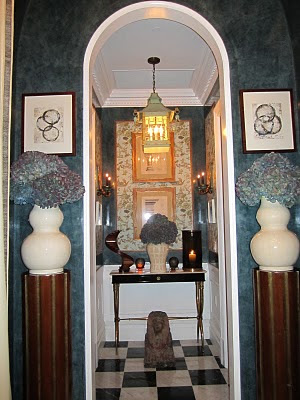 Without fail, some of the most memorable moments of Showhouses happen in what otherwise might be considered throw-away spaces… a landing, a hallway, an area tucked beneath a staircase… and much like Harry Potter in his own little under-the-stairs world of wonder, they can be filled with all sorts of surprising magic.

Kips Bay proved the rule: the tiny hallway designed by Rod Winterrowd was among my most favorite spaces, and packed full of inspiration and style. Symmetry, but not the kind that can’t be broken. Mixed vintage, provenance and pattern. Modern art in a not-so-modern space. Elements both dainty and heroic. And a hydrangea-blue palette that would equally amuse both lord and lady of the manor.

So what’s the lesson there? No space is too small to get the royal treatment. Or to house a little magic. 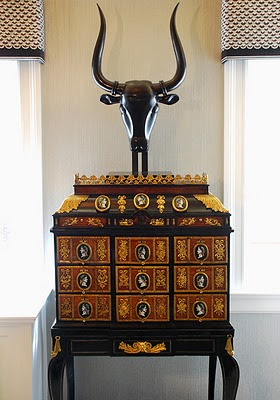 Walk into either of the His or Her spaces of Darren Henault, and you just feel the details were chosen and placed to tell an epic story about the room’s inhabitants. And like most great art, the story comes to life in the mind of the visitor. I took the cues of the minotaur head in the gentleman’s dressing room and the stylized Grecian folds of the plaster screen on the lady’s side to make this a story more God and Goddess than merely mortal His and Hers. Mythology, through an art deco lens. 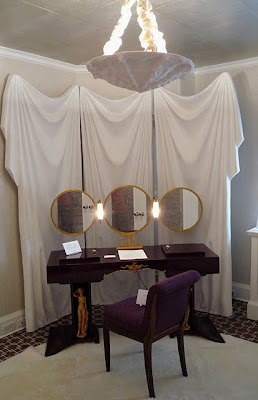 Story telling is often a trick used by designers when there is no real client… start an empty room, the blankest of canvasses, with a fictional client, be it dandy, hipster or grande dame, and run every decision through your own fictional filter. But that’s not just a trick… it’s a lesson. Look at the details of your own life and loves to inspire your next home makeover. Tell—and celebrate— your own story with the interior choices you make.

I also loved Darren's adjoining, mirror-image spaces for their compare and contrast qualities… each had a banquette, each balanced color contemporary art in a field of spare but splendid antiques. But with all their structural and functional similarities, they could not have been more different. Proof that when you make the client the hero, the room tells the inhabitant's story first, the designer's, second. 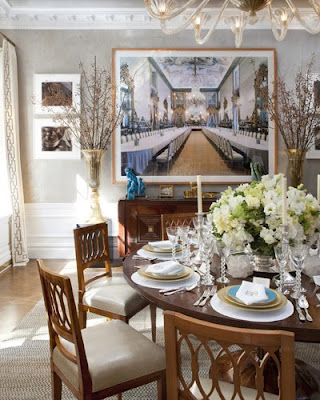 The dining room of Cullman and Kravis was also built around a story, but with more literal cues. The space itself was staged as a Dining Room (a great cube of a space just begging for that equally grand perfect circle of mahogany table), and the theme was indeed dining-driven… with Pop-art takes on food via the art, images of famous chefs, and all the way down to placecards on the table. This was either to be a feast like no other, or the setting for an Agatha Christie adaptation of “Who’s Killing the Great Chefs of America?” Either way, their layer cake of food references (some subtle, some cheeky, some grandiose, like the showstopper photograph by Candida Hoffer) proved that even a literal theme can find fresh manifestation.

The delectable take-out idea here? A pale palette comes to life with an injection of a brash color, like the cerulaean/teal blue accents here (a color, and color trick, I’ve also seen hue-master Jamie Drake use years before, with equal effect.) 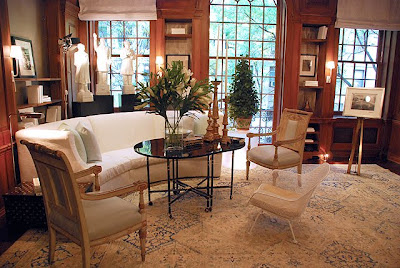 Image: VandM.com, DesigninTell
Some designers simply did what they do best at Kips Bay. Vicente Wolf’s room was classic, well, Wolf, a mix of furniture that shouldn’t work but does. He did surprisingly little to the paneled room itself (with an amazing plaster ceiling, a chalky collection of constellations that reminded one of the ceiling of Grand Central) but filled it with items that bore his unmistakable mark. He did seem to have a bit more fun with accessories than usual, with a trio of Mao’s and some medicinal modern art that only underscored his ability to make dissimilar notes sing harmoniously.

Were it me, I would have made the ceiling more the star, but fans of Wolf’s didn’t seem to notice or care, wowed by how his pale collection of interesting pieces, and his clever furniture groupings made practically an entire apartment from one ample room. And to any potential client wanting a primer on the recognizable style of Wolf, this room was living proof.

All of the Above 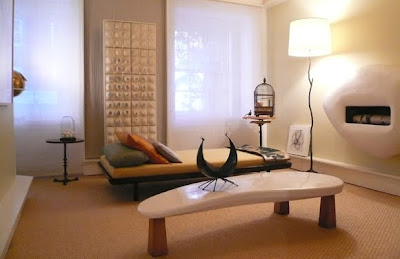 One room that brought theme, theatricality and practicality together, held its own in both photo and reality, made the most of a small but challenging space, and was living example of the designer's style was the walk-in haiku of ever-chic sister act Jayne and Joan Michaels, the two halves of 2michaels design. 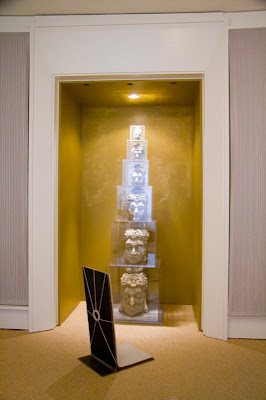 Their meditation space deep-breathed new life into the oft cliche concept of interior “Zen” design. The bird theme in their avian aerie was both subtle and specific, with bird sculpture and nest-and-egg references… most notably, the egg-shape plaster fireplace, porcelain screen, and twiggy light fixture.

But whereas Henault’s motif was artfully open for interpretation, and the Cullman and Kravis dining hall was deliciously specific, 2michaels struck a balance between fact and fiction. Who spends time here, reflecting on the stacked Buddhas, with birdsong as the score? I imagined it as a setting fit for the emperor in “The Nightingale,” reworked to cast a soigné bachelor with killer taste as the lead, in a production directed by Cocteau, set design by Gio Ponti.

So it seems, among the ranks of the design elite assembled for this past 2010 Kips Bay Showhouse, there were storytellers and poets, the media darlings and the walk-in ready, those who made the most of just a little, and those who just do what they do.

And in each choice, inspiration.