...about theme decorating, and a horse of a different color: Holiday House 2014, Derby Deconstructed 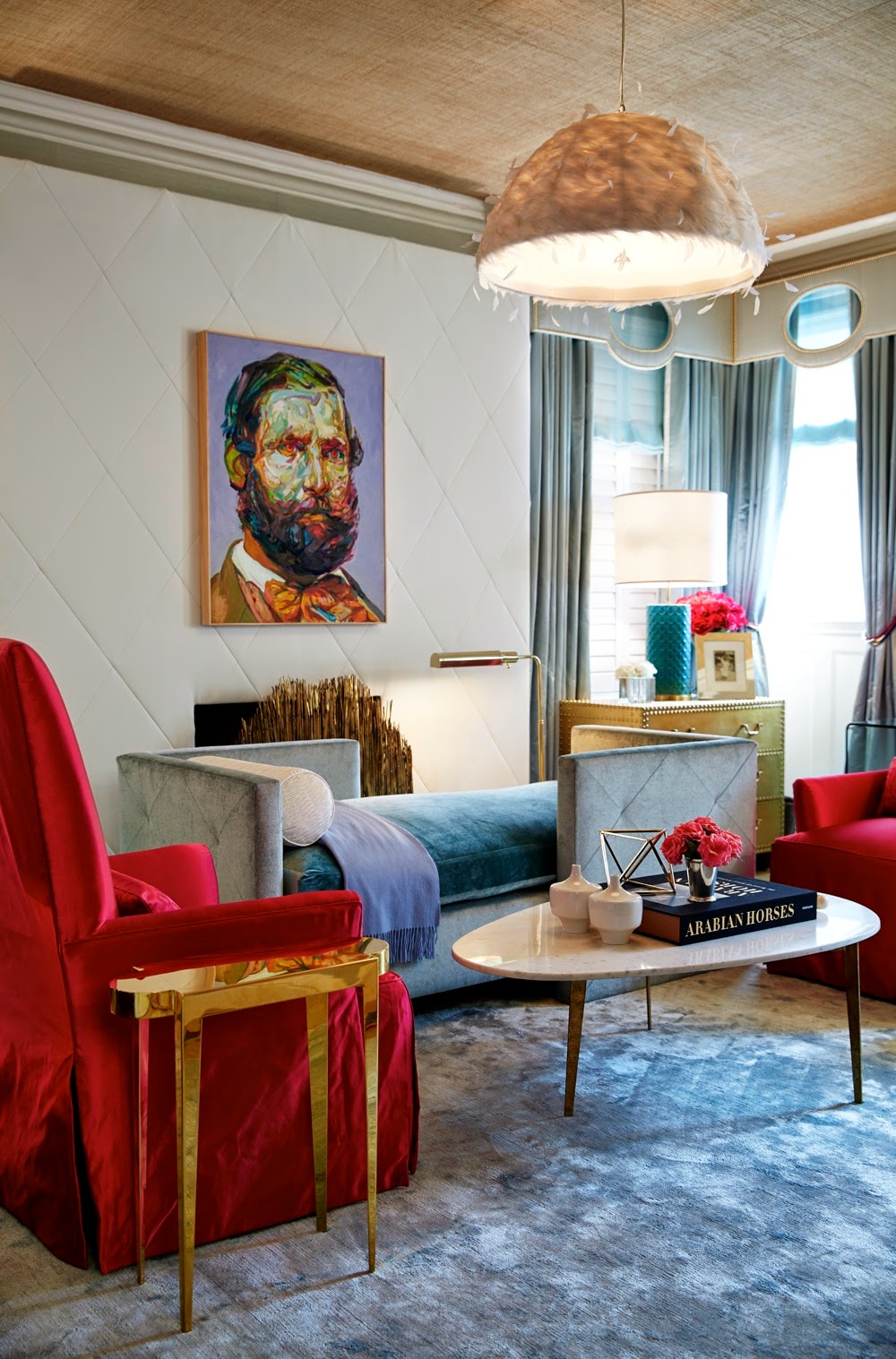 Theme decorating is a slippery slope. Done well, and you’re transported to an exotic Moorish room or major league executive front office. Not so well, with heavy hand and one-liner design, and you’re stuck in a Moroccan restaurant or loud-mouthed sports bar surrounded by, to paraphrase Beverly Leslie on Will & Grace, “kitsch and regret.”

Theme decorating done well is one of the reasons I love Holiday House. The annual Manhattan show house to benefit the Breast Cancer Research Foundation was built on a basis of holidays, events, and calendar moments, all meant to celebrate the days that happen when cancer doesn’t win. Over the years, design luminaries like Charles Pavarini, Suzanne Eason, Ally Coulter, James Rixner, Donald Schermerhorn and InsonWood have tackled then tamed holidays sometimes but not always associated with the polish and panache of one of Manhattan’s premier show houses. These, and the many other designers gracing the halls of the Academy Mansion each year have crafted subtle and witty spins on the likes of Halloween, Chinese New Year, Valentine’s, Mother’s and President’s days while steering fully clear of the rocky cliffs of cliché (and I joined them, for the first time, in 2013, with my Modern St. Patrick’s Day room).

This past year, I took on a day that is perhaps a little more synonymous with style: Kentucky Derby Day. Tradition, pageantry, sunny southern skies, cocktails served up in silver cups: it all seems a natural for inspiration.

Some very noted design icons have built careers (and empires) by channeling the thoroughbred style (I’m looking at you, Mr. Lauren). But I wanted to bring a horse of a different color to Holiday House. Following in the footsteps of that illustrious list of designers who’ve understood the difference between “inspired by” and “slave to” (and inspired me long before my first invite from organizer and wonder woman Iris Dankner to create my own room), I wanted a space that even a non-horseperson would love, but that definitely served as an homage to the venerable jewel in the Triple Crown.

That day in May has an abundance of inspiring elements, and I realized that by taking these elements apart, and recombining the pieces, I could make a room that succeeded on its own but still referenced the day. “Derby Deconstructed” was born. We were, if you’ll pardon one of the many horse puns possibly to come, off and running.

How can you be inspired by this room, even if your likes swing more to hockey, Hawaii or Hockney? Here are a few ideas. 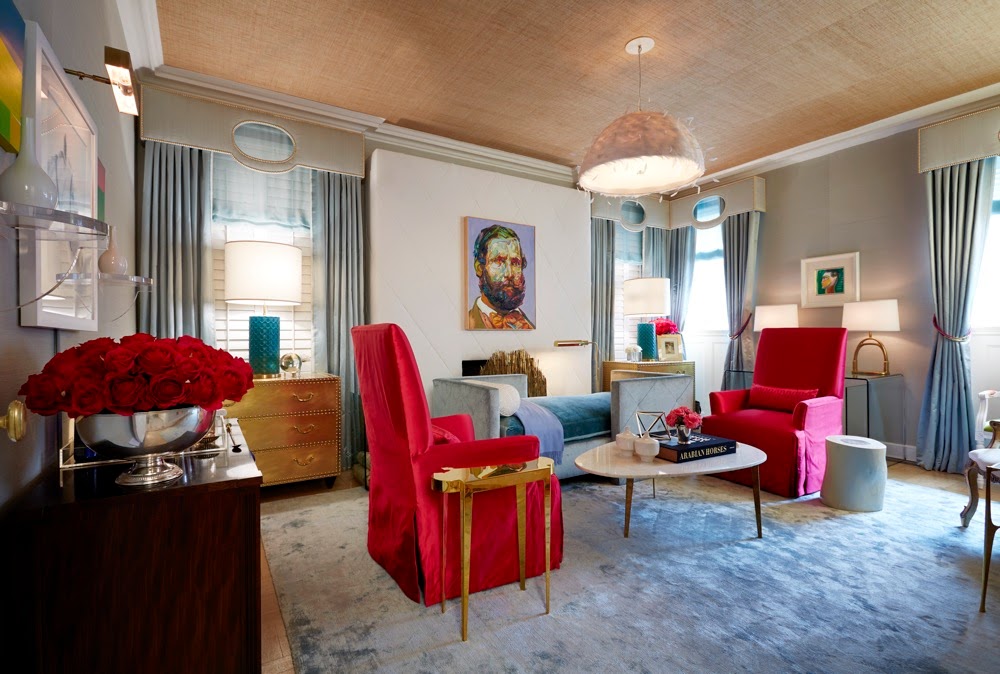 Channel the Place (and Start with the Envelope)
The Derby is quintessentially southern, so I knew I had to create a room that felt like it was part of an old Kentucky home. The room itself helped set the stage, with its handsome proportions and traditional molding. This room, it seemed, almost wanted to be southern. To nudge the illusion along, wide wooden Hunter Douglas (courtesy David Michael Interiors) shutters and strategically-placed brass chests turned recessed bookcases into faux walk-out porch windows. A great white paint from Farrow and Ball on the woodwork gave this room with good bones a classic look, fresh feel, and new lease on life.
In any room, I’d start by addressing the walls and windows, and in a room meant to conjure Japan, for example, I’d start with Indigo grasscloth paired with woven-wood or nubby silk window coverings. 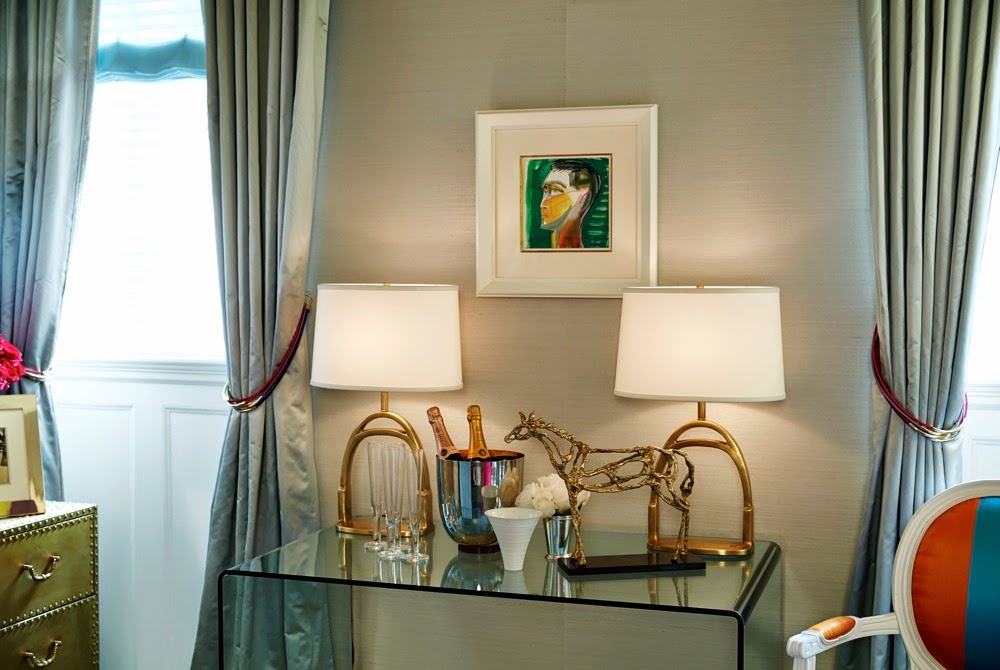 Color, Wonderful
Two of the most iconic parts of race day, mint juleps and the “Run for the Roses” moniker immediately conjured color. And if your artistic license is current, you can have a little fun bending the rules. After all, Mint juleps aren’t, at all, mint in color, but that’s what my walls became, again also to bring southern spring and charm to the Upper East side of Manhattan (AND to see if we couldn't give mint green a slightly better reputation). It also seemed to instantly evoke some old-school gentility by echoing a tucked-away color. 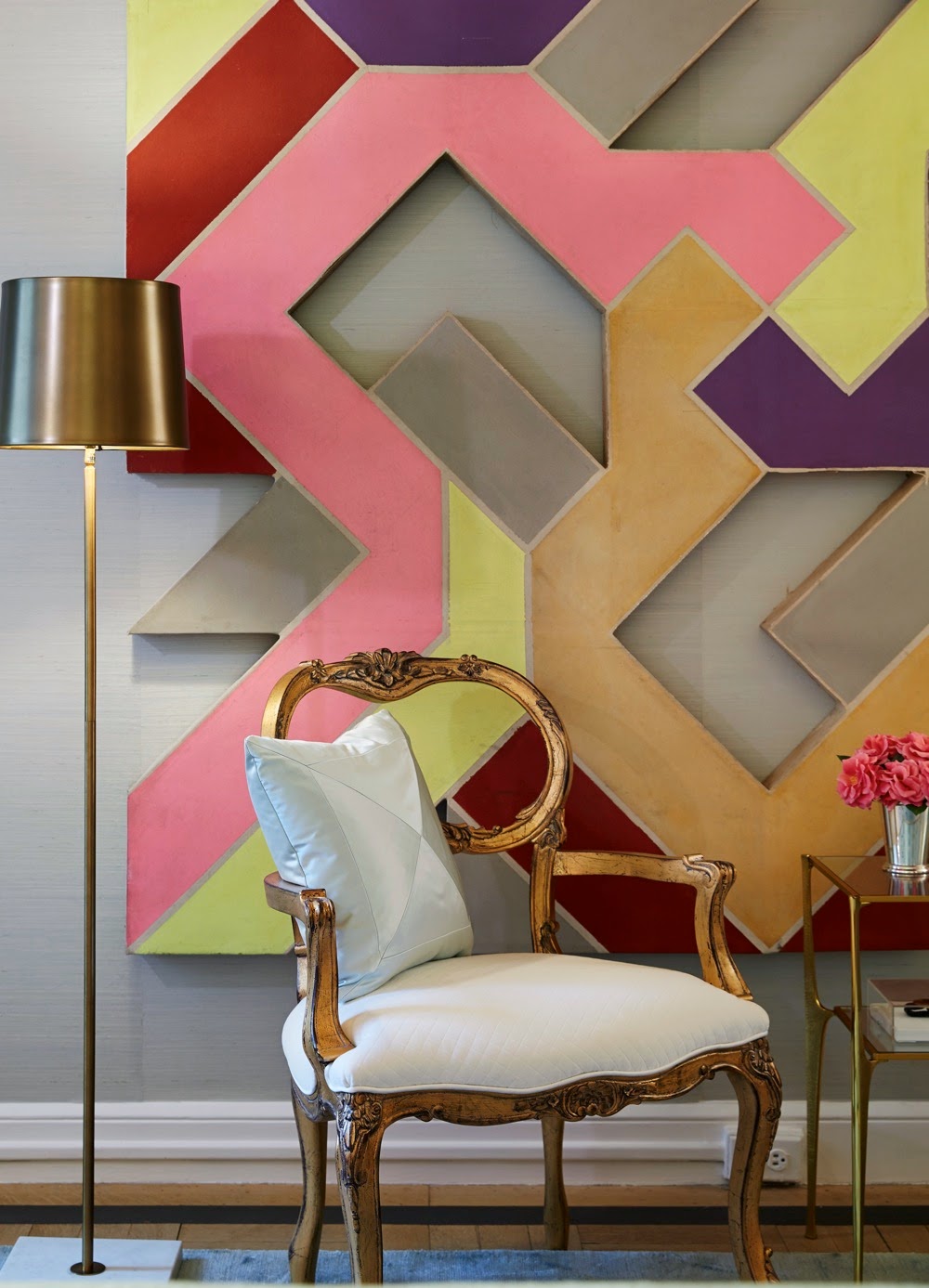 And as the poetry goes, those race-day roses are red... but mint and red seemed, well, dangerous. Instead, inspired by the ribbon pink of the event’s charitable purpose, the rose became an amped-up fuchsia. Turning up the volume from a typical faded or dusty rose also kept this room young and fresh... and let me use that eye-boggling JAB Anstoetz silk satin on those Bernhardt chairs, a color repeated in the custom NDI floral arrangements. Underneath it all, a minty green silk rug courtesy color meister Joe Carini at Carini Lang, with just enough bending to blue to suggest a dew-covered field of Kentucky bluegrass reflecting a cloudless spring morning. 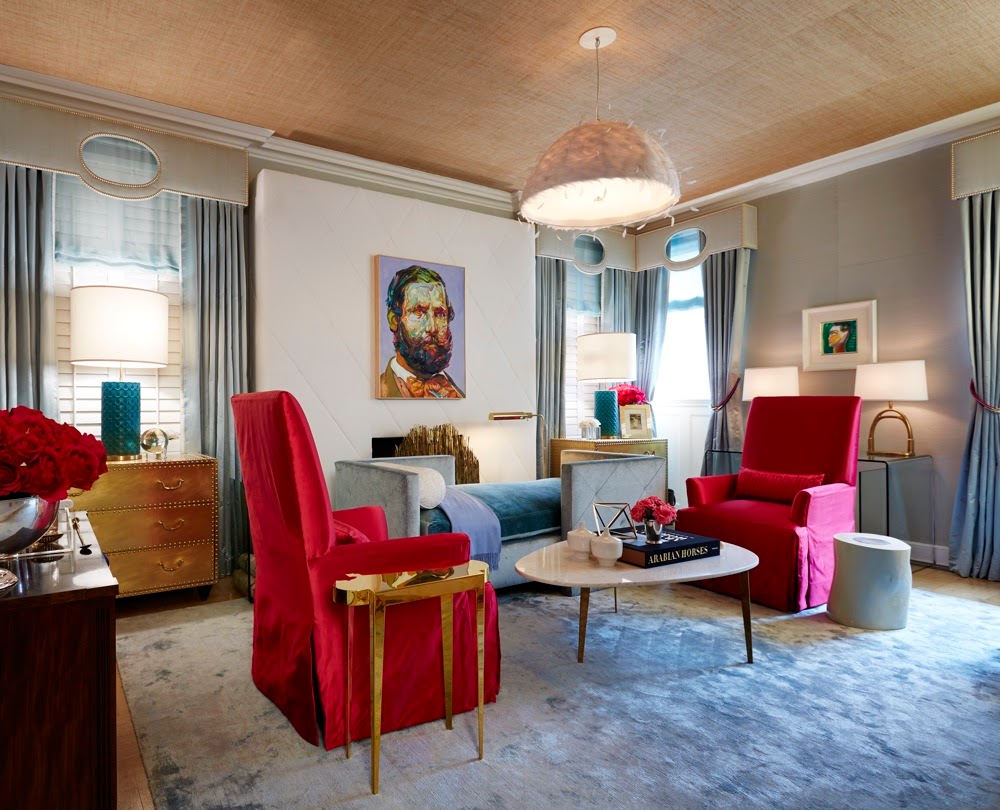 Materials, Girl!
Derby Day brings to mind all sorts of textures, from humble to haute. Straw from the stables, the brilliant flashes of racing silks atop white pants and black boots, leather, and brass. Take all those elements, mix well like sugar, mint and Woodford Reserve in a julep cup, and reapply! The white and leather mixed to become the padded fireplace surround. Straw went up on the ceiling (that Thibaut grasscloth), and those racing silks became the accent palette when actual silk wasn’t pressed into service. So let your Yankees room have (glove) leather and aluminum (bat) furniture, even if a logo or pinstripes are nowhere to be seen. 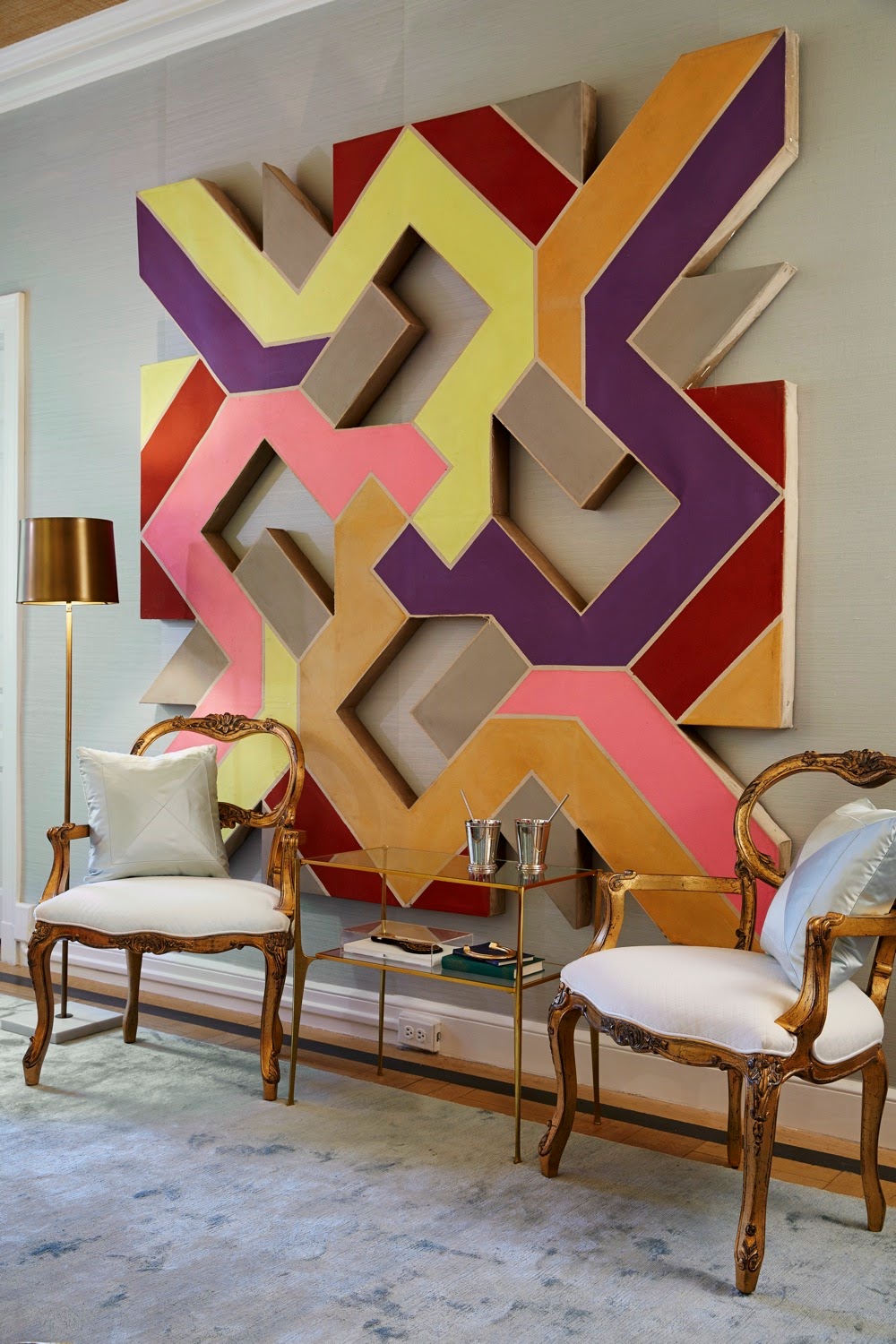 Pattern Play and Geometry, 101
Repeating geometry is one method I often employ to give an eclectic room some stable-izing (I warned you there’d be puns) underpinnings, and this room was no exception. 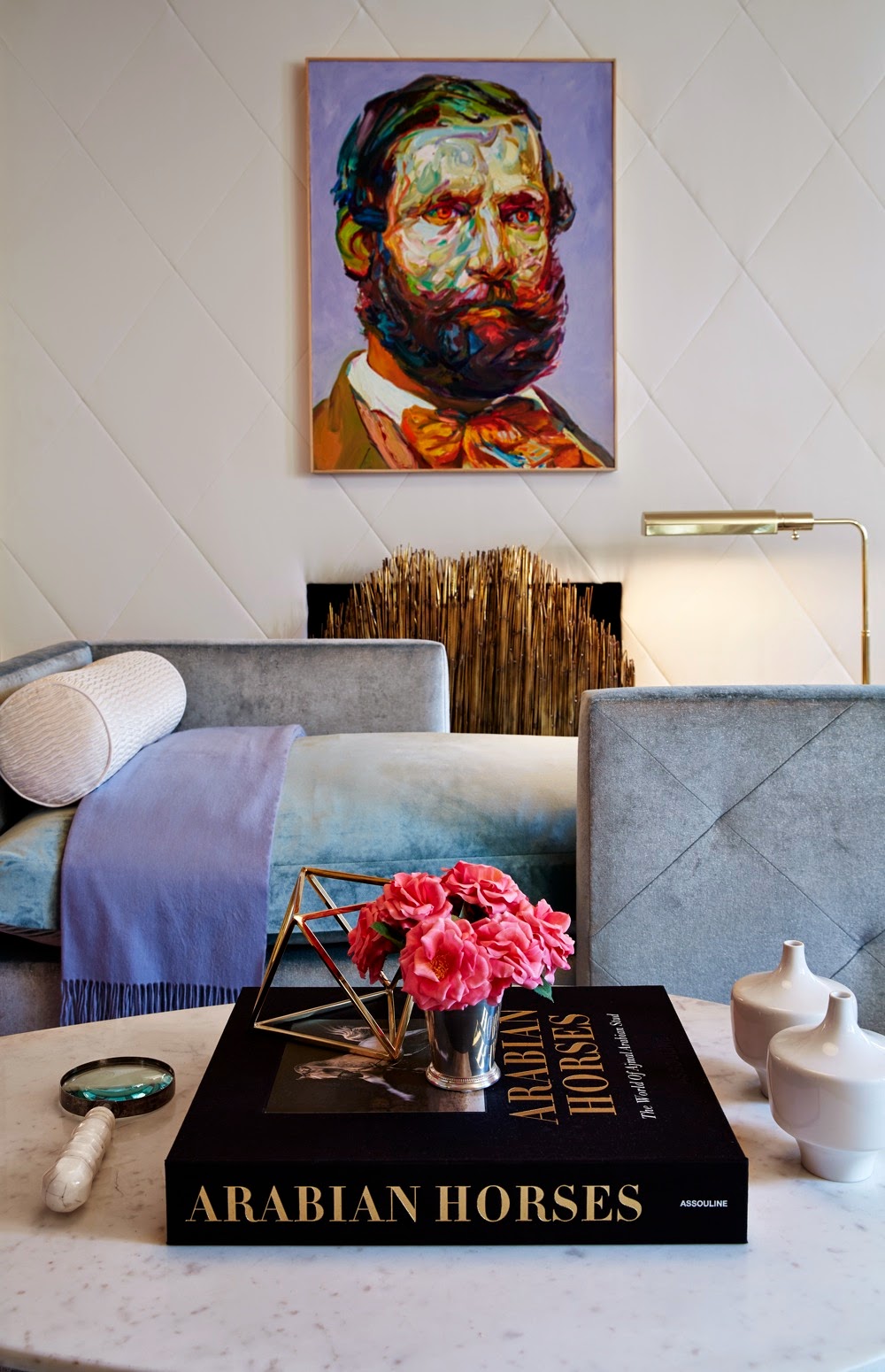 Harlequin diamonds were one of the patterns that became a leitmotif in the room, often seen in jockey shirts and stable flags. It popped up on the custom fireplace surround (New York’s The Workroom), diamond tufting (the custom Avery Boardman settee) and the quilted velvet on the gold-framed chairs (JAB Anstoetz on Currey & Company chairs). 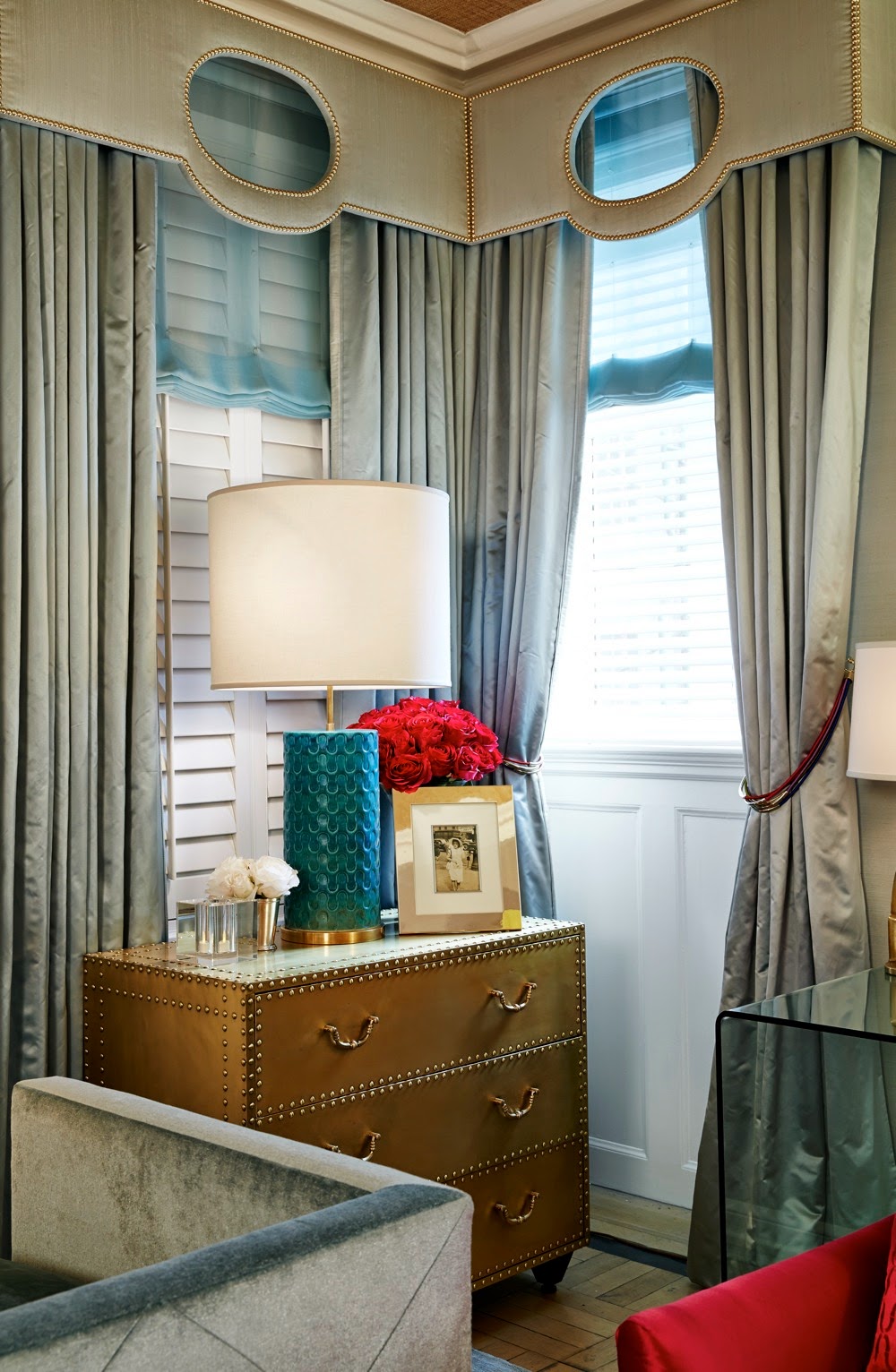 Along with the diamonds, the room had its fair share of racetrack ovals, both precise and relaxed, from the exquisitely crafted pelmets courtesy Marks &Tavano, to the Currey & Company chairs and the organic oval of the vintage-look Wisteria “Egg” coffee table. And the spilt-upholstery on the white-framed Currey & Company chairs also were directly lifted from a jockey’s locker. 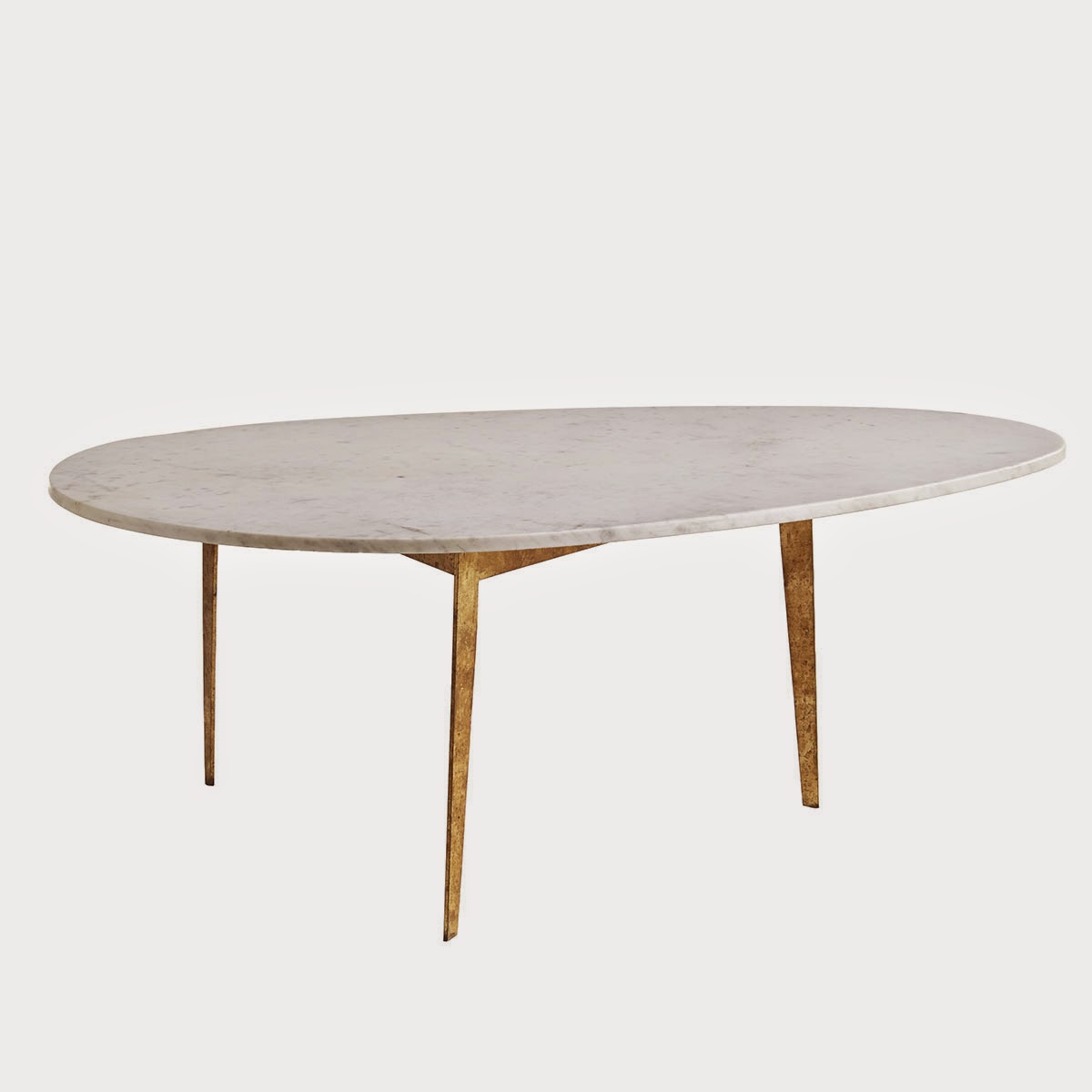 The lesson? Steal some geometry from the theme you’re trying to mimic: waves, star(fish) and scallop (shells) for something beachy, and not only do you evoke the thing you’re honoring, but you’re giving yourself welcome parameters to stave off any design paralysis when a world of options might otherwise overwhelm. 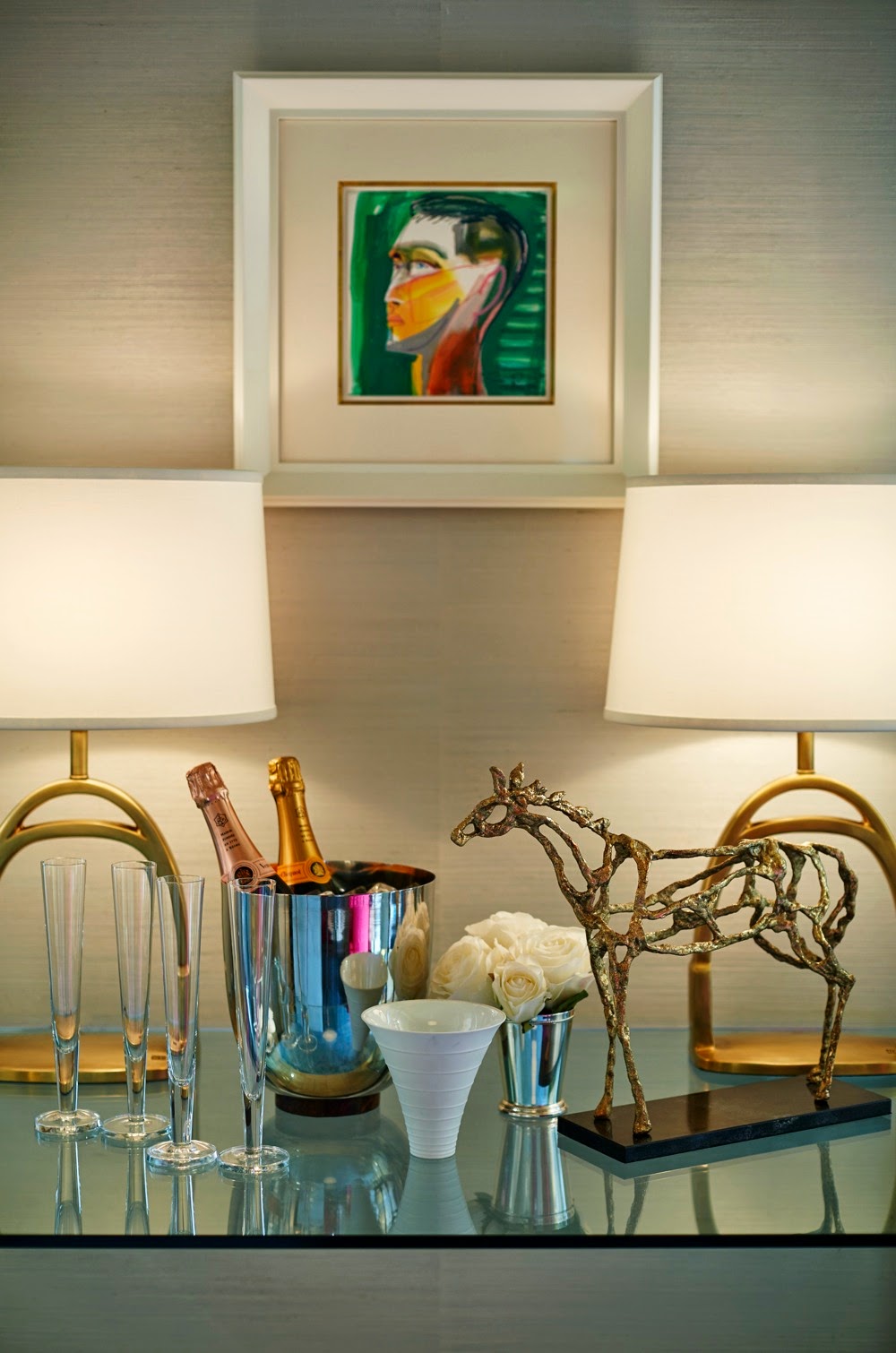 Context Matters
Once the stage is set, you can bring in other shapes and items that become something new just by the merit of their context. The pattern on the AERIN lamps from Circa Lighting became horseshoes just because they were in this room, just one example, the custom embroidery on the Villa Savoia embroidered pillows another. 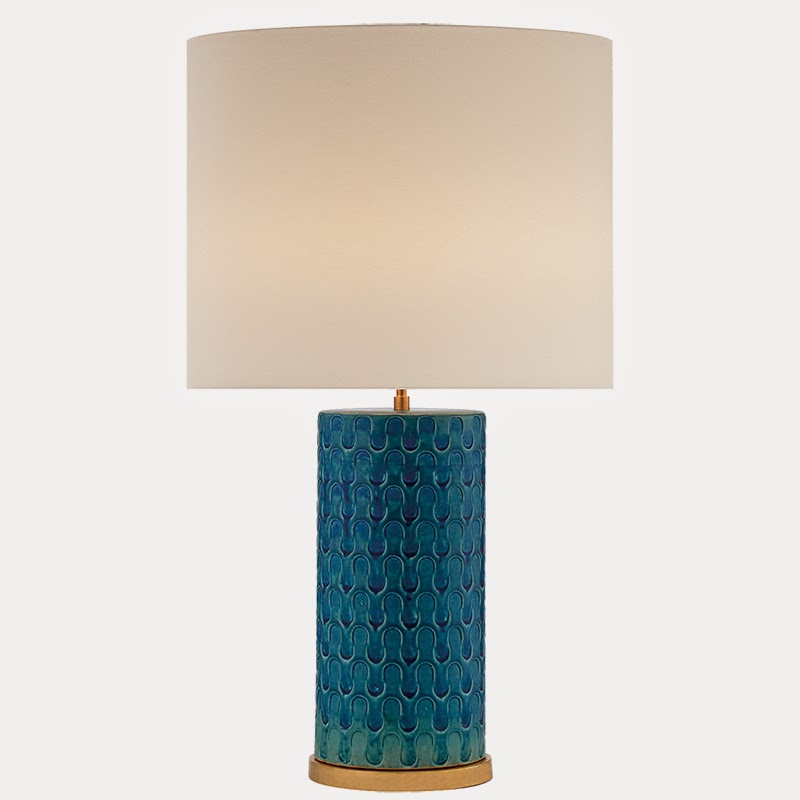 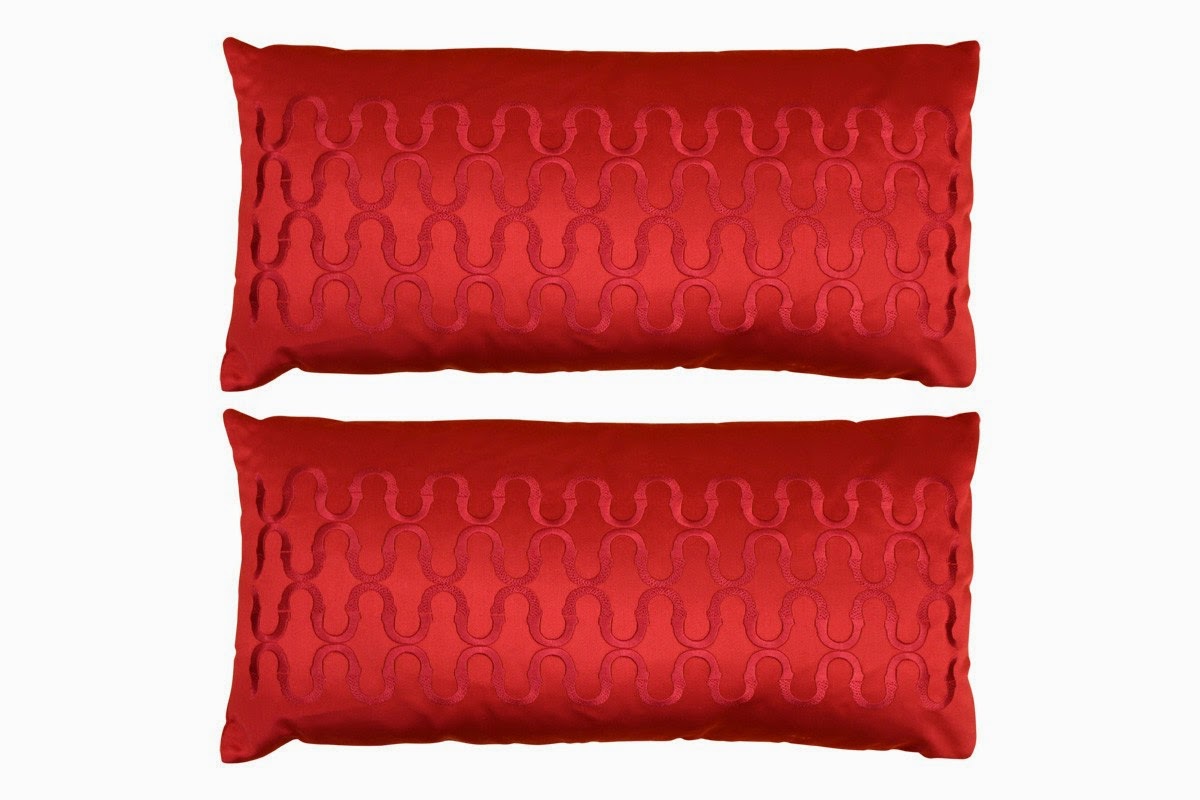 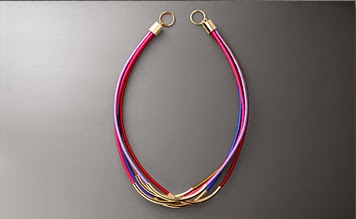 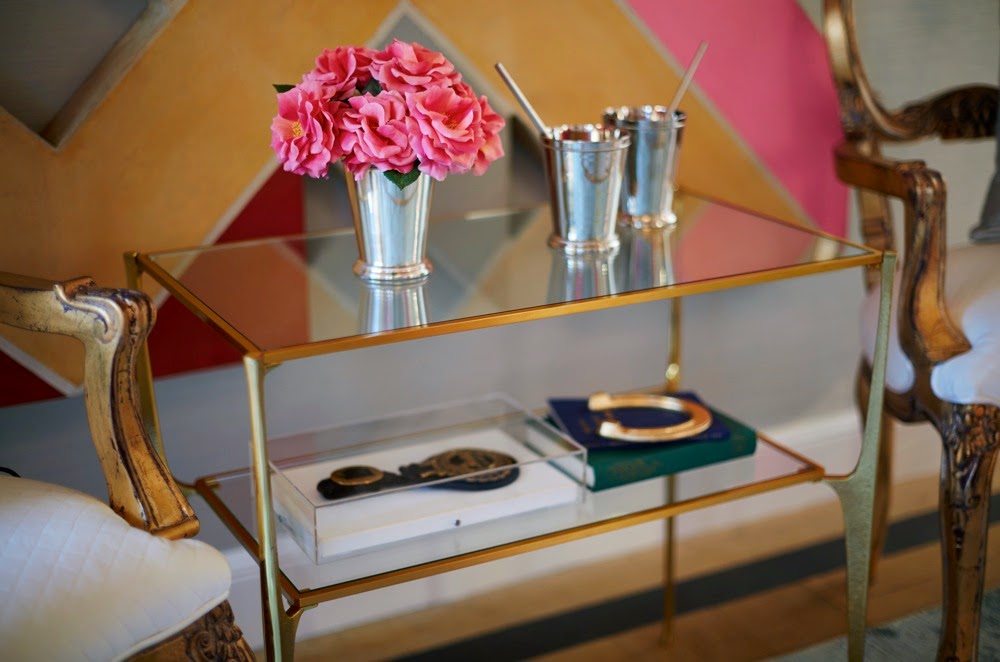 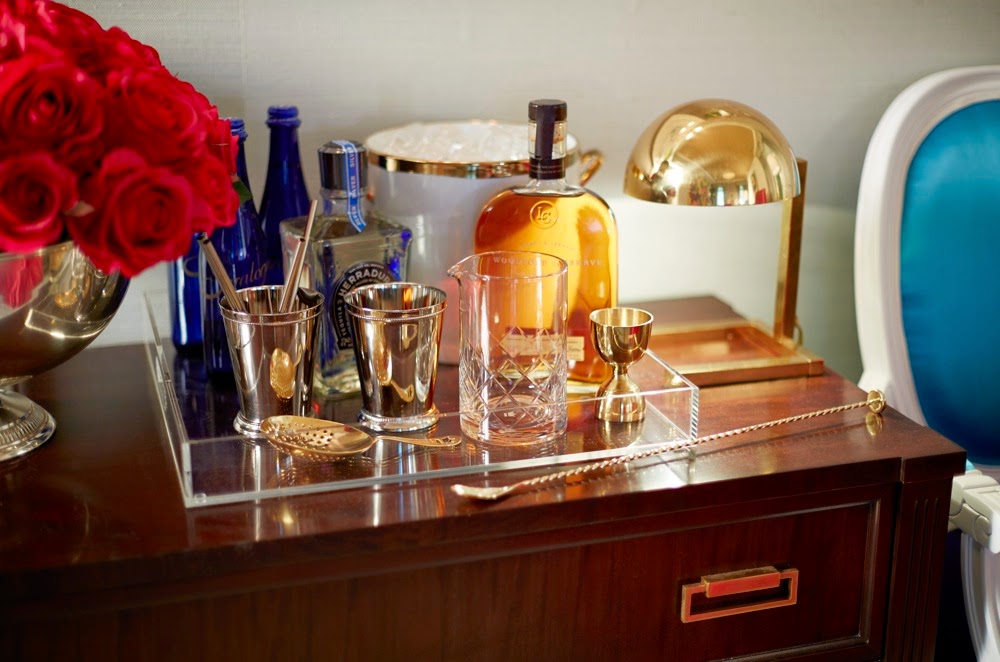 And when visitors, tipped off to the Derby Day theme, invariably asked, “Where’s the hat?” I pointed them directly overhead, where the witty and millinery-inspired feathered creation by Steven Wine of ABYULighting became the perfect stand-in. 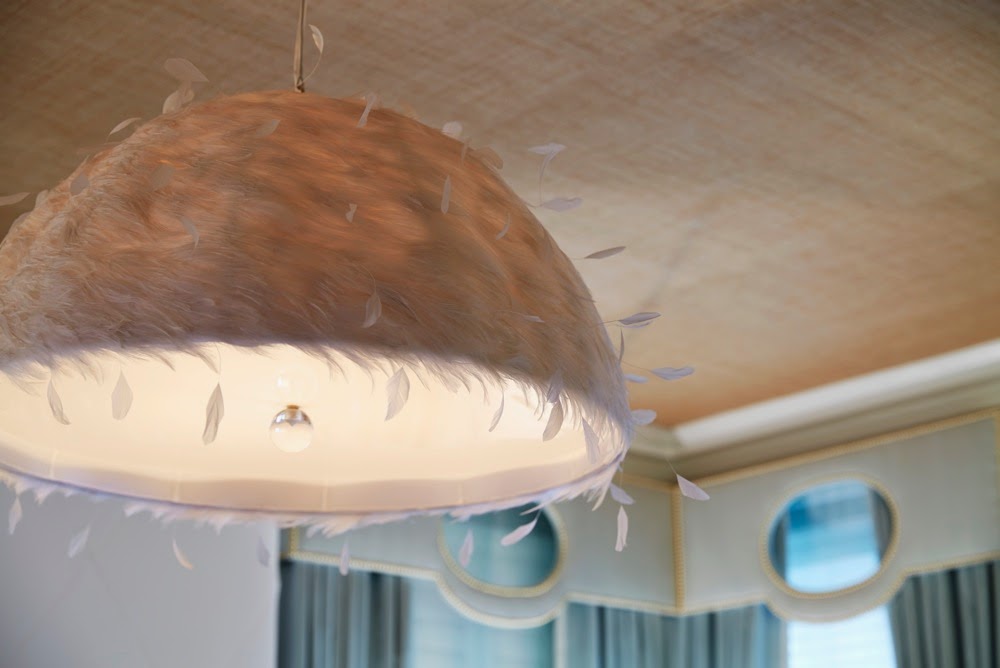 Even that gent over the fireplace seemed ready to play his part. While probably European or British in upbringing, the subject of the Technicolor oil by LA painter Aaron Smith became an instant southern patriarch, Bourbon magnate, Tennessee Williams protagonist or horse breeder. Big Daddy, indeed. 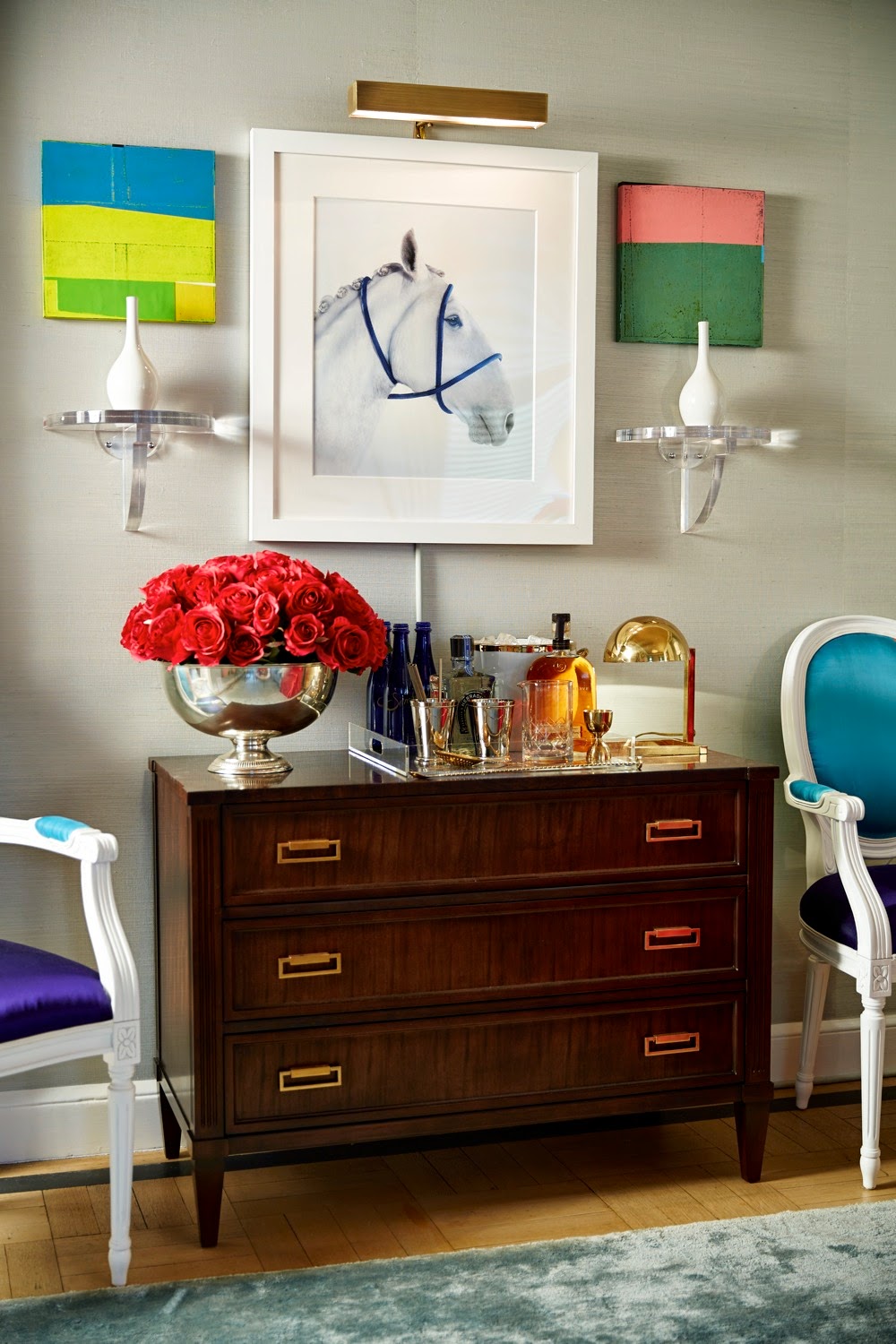 Let a Little Literal In... But Gently!

To let visitors in on the inside track of the room, some clues were more blatant than others... the Giacometti-ish Bungalow 5 Arabian horse statue ( a LOT of look for the money), the Jill Greenberg horse photo courtesy ClampArt, the commanding Assouline book, an antique horse brass from Nancy Price Interior Design, two horseshoes (gilded by The AlphaWorkshops), the bourbon bar and the Ralph Lauren stirrup-inspired Westbury lamps (also, Circa Lighting).

So, in a baseball-themed room, sure, hang up that (professionally shadow-boxed) jersey. Just (humor me one more time), rein in the impulse to cover every surface with literal references or mementos. Using a little restraint will let you create a space that speaks to aficionados and the, well, theme disinterested. And isn’t a space that makes everyone feel comfortable the ultimate trophy room? Giddy up!


See all the pieces from the room on my Derby Deconstructed Pinterest Board, and see more literal reference on my Equestrian Style Pinterest board.

Unless noted, all photos Jody Kivort.
Posted by patrick (the other one) at Saturday, May 02, 2015