...about "downstyling:" Deborah Needleman at the Decoration and Design Building 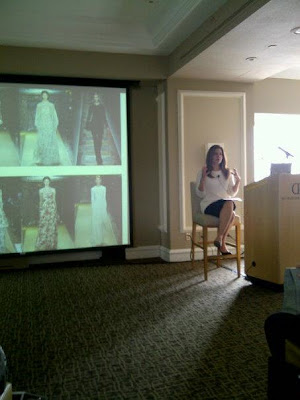 Her title: Editor in Chief of WSJ. Magazine, the Wall Street Journal luxury lifestyle title. Her legacy: the masthead matriarch of Domino. Her book: The Perfectly Imperfect Home. Her keynote at the D&D Spring Market: all about where luxury fits in, in the grand scheme, designer’s toolbox and Manhattan apartment. It was an interesting conceptual take on what everyone is always hungering for from editors and industry insiders: What’s new, what’s next? What’s the new It, the next Trend?

But Ms. Needleman avoided the “T” word, making no color forecast, no prognostication of the Next Big Thing. Instead, she talked about where she finds relevance and inspiration as she curates the story of good living to her blue chip readership (with great and growing numbers, per the excited publisher in his introduction of Ms. Needleman). But inspiration is not necessarily, from this interior design maven, where you’d expect she’d find it. Her muses of the moment? Fashion photography, the fashion runway, and food trends. 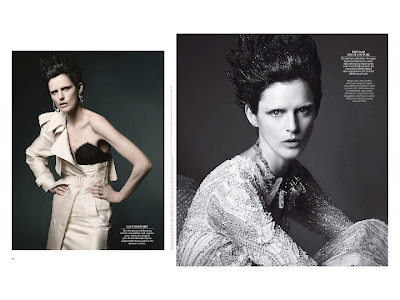 From fashion photography, via a recent couture story from WSJ, Ms. Needleman talked about today’s kind of elegance... unadorned, tough, edgy. The photos, shot against bare backdrop and with a barefoot Stella Tennant, were used to show the swing between classic elegance and a contemporary air. “It’s about,” she said, “the tension of beauty and mood.” Ms. Needleman called Tennant “a woman with a real life,” and cited her athletic, Amazonian presence, palpable strength and unexpected dyed-white brows as the reasons why these shots were a new-school take on Old World elegance. 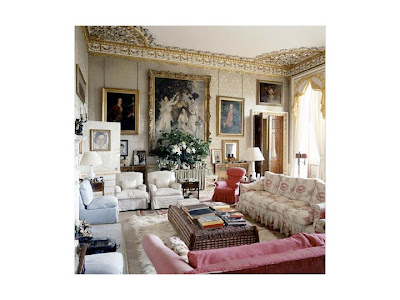 What’s the interior connection? According to Ms. Needleman, even a dressy traditional space needs something in counterpoint to keep the excess at bay. Her “Do” illustration was a room at first glance every bit as decadent as the “Don’t,” but Ms. Needleman picked out the quirk and charm she said made the interior a new kind of luxe: mismatched sofas, contemporary Schiele portrait, and a lived-in sense of comfort. In this example, it seems, the English, with their layered country homes, have it right, even right now. “Now is the time for charm,“ she said, adding an apt rallying cry for the room of assembled decorators, “and more pillows!” 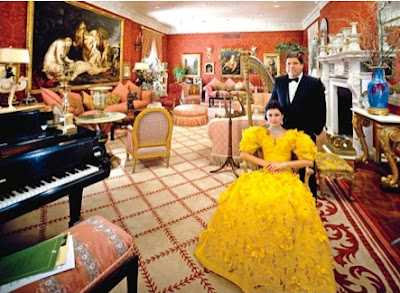 In contrast, she flashed a “Don’t” image of unadulterated tradition, more Crystal Carrington than Duchess of Windsor, with an air of conspicuous consumption that might give even Gordon Gekko pause. 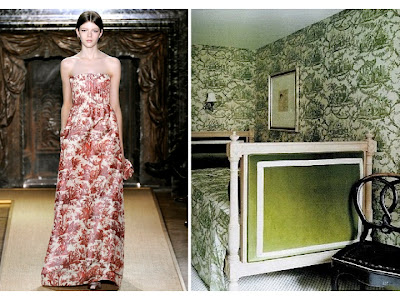 From fashion’s runways, the same sort of connection (softness with an edge, and vice-versa) but she also used images where a humble or “sweet” material was used architecturally, and without apology... an allover print, lace or floral. What she saw on these runways was something “decorative, yet puritanical,” and “an elegance tempered with simplicity.” 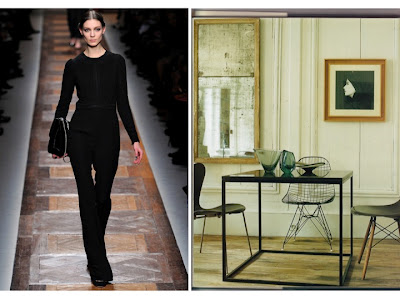 The rooms she used in concert were more of the same: chintz or florals used with abandon, or humble made chic, and in Ms. Needleman’s estimation, made fresh and new in the celebration of the simple. She was quick to clarify that these comparisons were about “letting something simple speak,” and that they were meant to be more ethereal examples and less literal connections than Domino’s “Turn this outfit into a room!” feature, although the difference did not seem all that defined... just a touch more upscale. 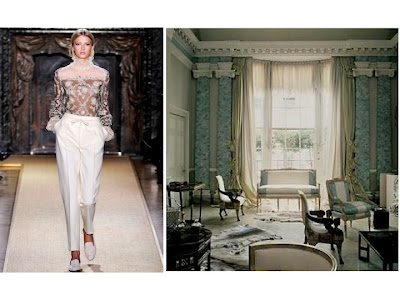 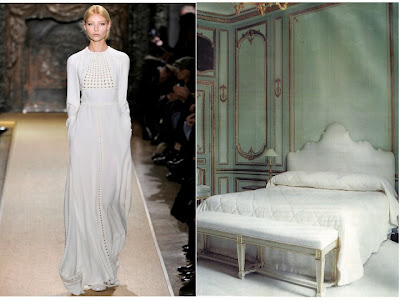 And finally, food. Citing farm-to-table movements, gastropubs and the hyper-specialization of the likes of olive oil stores and meatball shops, Ms. Needleman made a delicious case for the same kind of living: a celebration of “honest” materials, and rooms where the function is clear and celebrated. A stripped-down but sunlit room, with vintage soaking tub provided illustration. “This room is about bathing, and the pure joy of the Bath.” She got lots of nods from the room when she said, “Who doesn’t love a bath?” 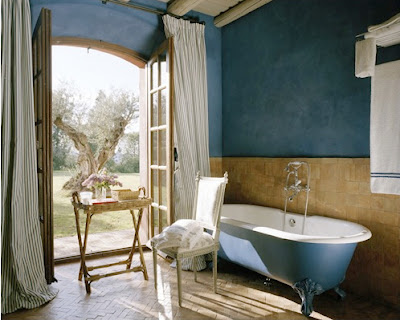 There were tie-ins here, too, to the runway concept of using one “ingredient” and running with it (chintz or pattern or function substituting for the meatball in the metaphor).  What it’s now about, said Ms. Needleman, is “simplicity, authenticity, a narrative and sense of place.”

But what of all this authenticity? Is that a relevant topic to a roomful of people charged with spinning yarns for their clients with imported textiles and custom-made pieces, much from within the walls of this top-tier and trade-only building?

There seemed to be in many of her examples a statement, too, about femininity: that something sweet can be strong, no explanation necessary. Along those lines, and with a slight apology to the handful of men in the packed room, she said, “It’s a good time to be a woman decorator,” going on to say, “women think more about how people use space.” 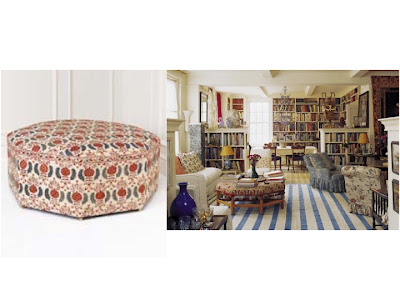 The idea that rooms are meant to be used, frayed edges be damned, and her mantra of “perfectly imperfect,” the essence of Ms. Needleman’s book and at the root of her keynote, all rings true when we are pressed for time and tight on budget. But Ms. Needleman’s examples still felt quite aspirational. The same could also be said of Undecorate, the book by DwellStudio’s Christiane Lemieux, where each interior seems to try to outdo the next for how “unstyled” the highly styled interiors could be. Likewise, those shots of supermodel Ms. Tennant were done by the absolute best in the business, with staggering day rates and a cast of many, all in the interest of “simplicity.” To paraphrase Dolly Parton, “It takes a lot of money to look this undecorated.” 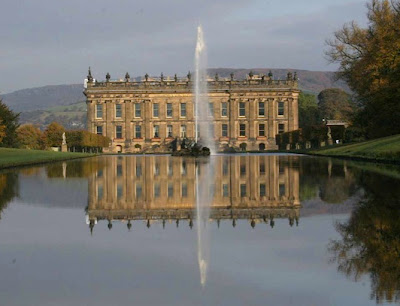 And, apparently, it takes a bit of cash to live this simply... English manors, Spanish country homes, rolling family estates, and Porthault linens were the images on the screen. No connection was necessarily made to how to get these couture ideas right off the rack, in a building of high-end sources where a CB2 recently moved in just downstairs. 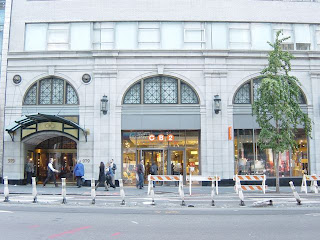 It seems also, to be about context: a threadbare sofa seems chic and terribly unaffected in a manor on the Scottish moors. In a Manhattan studio, something gets lost in the translation. And if not context, maybe backstory. That “real woman” Tennant? She’s the granddaughter of Andrew Cavendish, 11th Duke of Devonshire and Deborah Mitford, the last of the noted Mitford sisters. 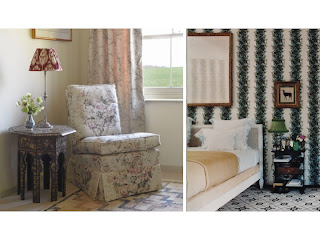 It’s also all interesting, in the context of Ms. Needleman’s past with now-folded Domino,  a casualty of the tough times besetting the shelter-magazine world. Domino had a DIY and budget vibe (The scripty captions! The exclamation points!!!) while heralding designers who wouldn’t take a commission under $10,000 (and up) in fees alone for a single room. It seems that high/low disconnect possibly led to an advertiser/reader disconnect, too.

Is all this intentional “downstyling” a self-conscious apology for wealth in an Occupy Wall Street world? Or is it just the next iteration of tradition through the lens of a new generation? Is “It’s time to lighten up the luxury” just a way to address a still-faltering or stalled economy or a return to something real? Choice, or necessity? Not sure, but interesting to consider. Is, as Ms. Needleman suggests, the idea of “indulgence” as dated as the shoulder pads of Dynasty? Or is the attempted avoidance of looking indulgent just a shtick and charade, like the court members of Versailles dressing like peasants for kicks and giggles? Or maybe this is just what luxury and style will look like when our newest wave of Facebook-funded millionaires start hiring designers and showing their lofts off on The Selby.

Granted, “budget” is a HIGHLY subjective topic, especially in a design building (where later in the day, curator-extraordinaire Murray Moss touted the "simple" joys of $200 drinking glasses, although his namesake store Moss, which used to sell those glasses, is now defunct) and another presenter talked about the issues of removing her MoMA-caliber collection to make way for her daughter’s at-home birthday party. I just wish the connections to a different tier of client had been made, by someone, somewhere. But maybe, to this audience, that would have been sacrilege, like bringing a GAP shopping bag to Fashion Week.

Later in the day, I spoke to the connected and buoyant Suzanne Sokolov, of Boost Marketing, and she talked about a rising vibe of similar “authenticity” in the interior blog community, specifically, “Things I’m Afraid to Tell You,” a viral confessional of sorts where some of the blogosphere’s best admit to not being able to make rent or afford the luxury goods they’re all-a-Twitter over, among other things laid bare, publicly. There seems to be the desire for honesty there, too.

Are we ready for al this honesty, and a new kind of warts-and-all, perfectly imperfect, downstyled luxury? Not sure. When times are tough, there's something, sometimes, to be said for aspiration and a little bit of artifice. I do like, though, the idea that definitions of beauty and good design need a good airing out every now and then. Just like those English Country homes.

Get social! Find the D&D Building and WSJ Magazine on Facebook.

All images, except for the event photo and the D&D Building/CB2 image: WSJ.Magazine, from Deborah Needleman's keynote presentation, used with permission of the D&D Building.