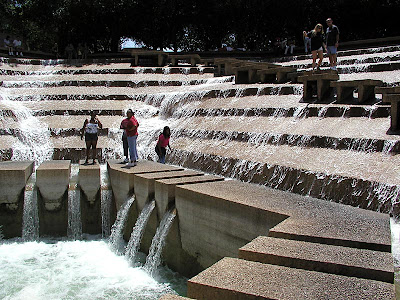 To round out this list, I looked to my design-savvy friends for notable suggestions outside my own travels, and Architect and RISD classmate Scott Briggs (noted for his own work on the Children's Library Discovery Center, Delaware Children's Museum, and as lead designer and project manager on the Children’s Museum of Virginia, among others) added the Ft. Worth Water Gardens, designed by architect Philip Johnson. Says Scott, “It’s a pleasingly, serene series of fountains, pools and garden spaces by Philip Johnson. His work was so uneven over his long career, but I think he got it just right here— a real crowd pleaser.”

It pleases, no doubt, for the reasons the Crown Fountain and WaterFire do: people, simply, love to play in water. But it also works because it is integrated into its surroundings, and it becomes a modern interpretation of the man-made hills and dales, lakes and streams of the past’s grand public parks like Frederick Law Olmsted’s Central Park and the Boston Common. It uses the principles of art— rhythm and repetition, compare and contrast—to almost musical effect. (In fact, sound is a great player in this watery spectacle). 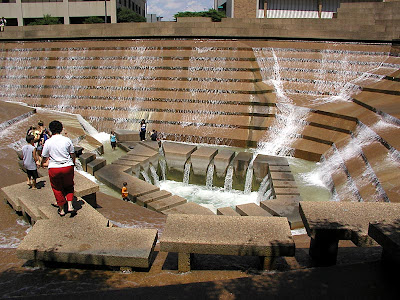 It all but begs you to dangle a leg and dip a toe, to use its contemporary steps and concrete shapes as landing pads and stepping stones. It creates its own world that has proven almost as irresistible to movie makers (It was featured in Logan’s Run) and ad men, where it’s rarely upstaged by the shiny Buick or Chevrolet parked on its steps.

The park’s three main pools: the Aerating pool, the Quiet Pool, and the Active Pool, reveal an architect’s gift for crafting a progression of spatial experiences. It’s been given a good recent scrub and new access to the city’s Convention Center to keep this a fresh and worthy Art destination.

It’s all folded into the Ft. Worth landscape effortlessly, like it was applied to existing terrain by modern Mayans. And that it seems like it was always there is, in large measure, a measure of its artful success.