...about remembrances, revelations, and the rainbow connection: the design best of 2016, part 3. 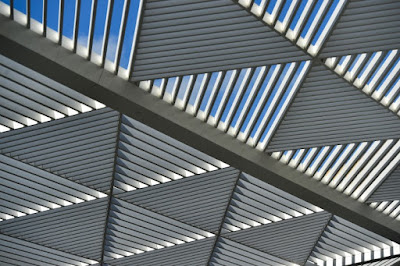 Clichéd or not, like it or not, it’s an inarguable fact: the design world has long been populated by a considerable presence of gay, lesbian, bisexual, and transgender women and men, LGBT people who own and run and patronize its galleries and showrooms, edit and publish and appear in its magazines, receive its honors and awards, exuberantly contribute to popular trend and global culture.... and spend— and facilitate the spending of— billions of dollars.

Let's head down to New York's Greenwich Village, historic turf in the LGBT story, to see why Part 3 of my Design Best of 2016 honors design developments from, within, and impacting the LGBT community: a community I’m proud to be a part of, even if the year for us was marred by great tragedy... and has been before. Because so much of that pride stems from how we remember, and how we react, and how we rise, in those terrible times. 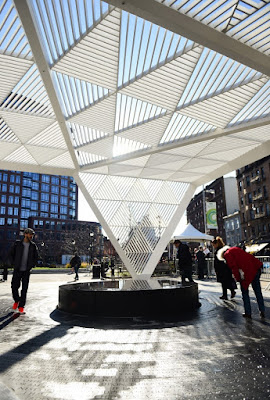 New York’s AIDS Memorial
A redesigned wedge of the West Village was dedicated this past World AIDS Day in Manhattan, to honor the New York community catastrophically decimated by the AIDS epidemic. It sits in the shadow of the now-shuttered St. Vincent’s, the hospital which saw so many enter its halls with a then-mystery ailment... and never walk back out, bodies instead taken out subterranean hallways, to funeral homes who often refused them even in death, out of fear, religious zealotry, or sheer ignorance.

That was part of the bleak reality of the New York City chapter of the AIDS crisis, but the city park and monument are anything but. Somber, in some ways, but dwelling in a place of strength, honor, and inspiration, not solely mourning. 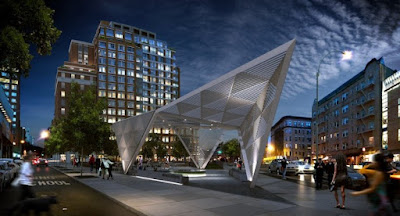 The shape of its plot, and the triangles of and within its canopy give meaningful structure to a triangle of another color: the Pink Triangle of Nazi Germany, stitched to shirt and jacket arms of confirmed or suspected Gays during the Holocaust, and the reverberation of symbolism begins there. The triangle, also an integral part of the geometry of quilt making, also hearkens to “the Quilt,” the Names Project that honored and deeply touched so many, for its ability to communicate both intimate humanity and staggering scale.

The canopy, like the Calatrava Transportation Hub, is most intentionally white, seemingly borrowing from a nearby building to help give the small parcel some greater significance, but also carrying its own baggage of color symbolism: both hospital and heaven come to mind, in its sterility and, in bright Manhhattan light, its dazzle. 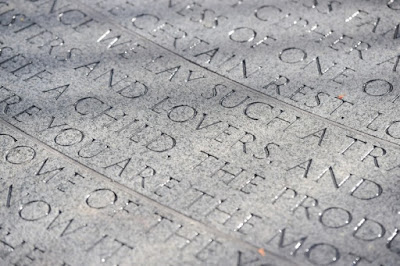 The memorial also incorporates a permanent installation by text-driven visual artist Jenny Holtzer, who selected passages from Walt Whitman’s “Song of Myself,” radiating from the monument’s center. That ring ripples outward from the quiet, shaded interior, towards the din and activity of the surrounding streets. It’s an apt visual metaphor for the loss that began for each victim in one place, privately, then quickly amplified, and stripped so many of so much, from our homes, neighborhoods, lives, and American culture, in ways we'll probably never fully understand.

Although diminutive in size by most standards, the memorial designed by the Brooklyn firm Studio ai carries great weight. It’s a tricky task, to ask a piece of land, some epoxied steel and transplanted trees to honor, remember, mourn, lift, and inspire, but the net effect is generally all that, and more. Like all good public art and memorials, the final chapter of the experience is written by the visitor, drawing his or her own conclusion, bringing his or her own memory, grief, or bond, choosing to pause either in the light or the shadow cast by its angular, sheltering, embracing pergola.

Alexandra Schwartz of the New Yorker does the site more service than I, and her piece is definitely worth the read. And hear directly from co-founder Christopher Tepper on what’s next for the memorial, and why its details and choices hold so much significance, and a possible interactive component, in his interview with POZ. 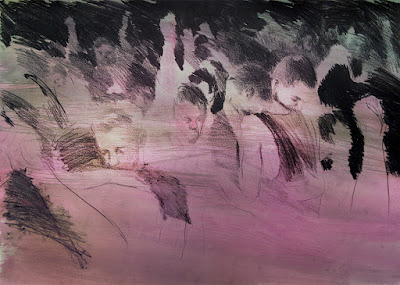 Grace Under Pressure, and Gays Against Guns: An Artful Response to Tragedy

The LGBT community is also a population who, in moments of great turmoil, finds elegant and unique expression as outlet and catalyst to change. This year tested that very theory. In the horrible wake of the massacre at the Gay nightclub Pulse in Orlando, they did just that. As author J. Bryan Lowder so movingly documents in “Pulse and the Power of Queer Tears,” his must-read piece for Slate, the healing began with local drag queens exorcising their grief on Orlando dance floors, with beautiful defiance and ferocity. In the process, they raised spirits and funds for families of the men and women who showed up one Saturday night to dance and never made it back home. 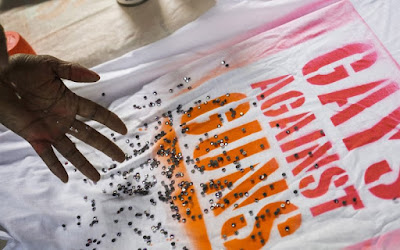 But it didn't stop there. A new national offshoot of this artistic response to grief is Gays Against Guns (GAG), an organization born in the moments of anger and mourning after the Orlando shooting. GAG is an activism group not unlike other communities coming together to plead for a stronger solution to our gun epidemic (The Brady Campaign, Moms Demand Action). But this LGBT group has infused its grassroots presence with striking visual performance-art-like presentations: their white-shrouded “Human Beings,” each bearing the image of one of the Orlando lost, which hushed New York City’s Pride march end to end at the first of their ghostly appearances, and their anti-NRA “blood puppets” and die-ins since then. You can even get a DIY GAG t-shirt stencil off of Etsy. 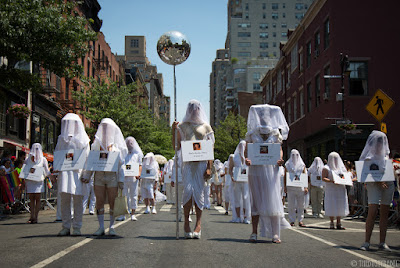 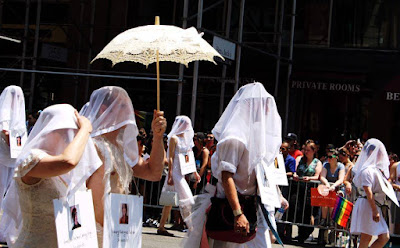 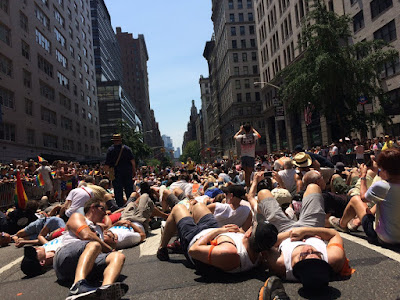 GAG of course owes much of that stylized, theatrical and considered visual presentation to  the earlier ACT UP! (GAG has ACT UP! members within its membership), itself a reaction to the AIDS crisis, and the creators of verbiage, imagery and language indelibly linked to the AIDS activism movement... whether cries of "Act up! Fight back! End AIDS!", the Silence = Death symbol, the St. Patrick’s die-in, or a giant condom covering the home of anti-LGBT North Carolina Senator Jesse Helms.

The Pulse massacre was not the first time grief has cast its shadow across a community most often defined by exuberance, flamboyance, and pride. Nor is it the first time the response has been art-fueled, choreographed, or designed. It seems the gay community has long understood the advice Meryl Streep gave during her Golden Globe Lifetime achievement award acceptance speech, quoting Carrie Fisher: “Turn heartbeak into art.”

From the AIDS crisis to the ongoing fight for civil rights to GAG's response to unfettered gun violence, the community has done just that, creating great works of art, striking graphic symbolism, prize-winning literature, and pivotal works of cinema and theater.

The beautiful phoenix from grief’s gray ashes: it’s yielded dance-a-thons, art from Keith Haring, plays like Angels in America and Larry Kramer’s The Normal Heart, The Laramie Project, the NoH8 photo series, Io Tillet Wright’s Self Evident Truths portrait project, and more recently, David France’s Academy-Award nominated documentary How to Survive a Plague, and the 2016 companion non-fiction volume of the same name. And our history lessons continue to take artful shape: Alan Bounville's work-in-progress, Adonis Memories, springs to mind, and the personal, compelling videos and stories of I'm From Driftwood, another.

These moments of individual expression have also crystallized larger groups merging activism, fundraising, and the arts: Design Industry Foundation Fights AIDS, Broadway Cares/Equity Fights AIDS (BCEFA) and events like Visual AIDS: Postcards from the Edge, BCEFA’s cheeky “Broadway Bares” fundraisers, and Housing Works’ alignment with the design and fashion communities through Design on a Dime and Fashion for Action.

Of course, it is not only the LGBT community which responds to grief with a desire to create, but it seems to be a stage on which our community of performers, drag queens, designers, singers, songwriters, and authors seems the most at home: to ease mourning, to release grief, to provide catharsis. (My own attempt, an essay for The Bilerico Project on LGBTQ Nation, post-Orlando.)

Action, by design. Because design isn’t a room, a thing on a wall, something that you draw on CAD or SketchUp. Design is a response to a situation, a solution to a problem, an often intangible act which creates something either equally intangible, or totally concrete. 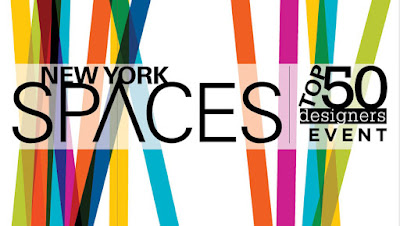 New York Spaces Comes Out of the Closet... with Exuberance.

While it hits the stands in 2017, Editor in Chief Jason Kontos of New York Spaces made the announcement in 2016 at the high-profile New York Spaces Top 50 Designers party at Mitchell Gold + Bob Williams, SoHo: Davler Media Publishing, publisher of New York Spaces, will be launching Exuberance, a home and lifestyle-based magazine tailored to the LGBT community. Kontos, longtime Hearst-er before joining Davler, is also heading up the mast at the new title, taglined “Design in living for LGBT,” as its Editor in Chief. Lisa Ben-Ivsy will also serve as publisher for the new issue.

As Next magazine closed its pages this year in New York City, perhaps Exuberance signals a new day of LGBT publications: less underground, a lot more glossy, and a lot more mainstream in its courting of the considerable Gay Dollar.


Exuberance will have an initial New York City distribution, with future release in L.A. and Miami based on the title’s NYC performance. The first issue is slated for a February 2017 launch.