...about starting from scratch. 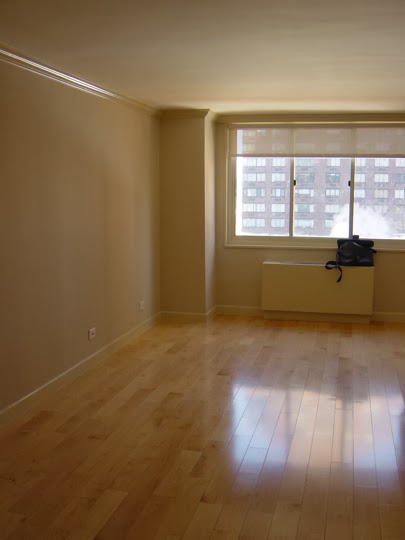 Those words are both a blessing and a curse: full of creative potential, yet sometimes, the complete capacity to cripple a project from the sheer and staggering possibilities, even, at times, for a designer.
Starting from scratch: usually, I don’t have the fun or luxury of doing it for clients. Very often, we’re building from an existing rug, favorite art, some main pieces— a sofa, a dresser, a headboard— traces of a past apartment, loft or life.

And boy, this job was from scratch: an empty rental, with my client “Lynda” starting a new, husband-free chapter, making a clean break to an Upper Westside rental high-rise, with her young son.

And clean it was...  newly renovated, fresh paint and shiny floors. EMPTY. We’re talking echo-echo-echo empty. Not even mattresses, hangers or towels, paper or terry cloth.

So the task at hand was to fill four-ish (more on that later) rooms with every single stick of furniture, piece of art, pillow, accessory and light bulb. Do it quickly (the lease was signed the day I was brought on board), do it on a tight budget, and do it to the standard that the client was used to. (Yeah, that rule of “Time, money, quality... pick two” doesn’t always apply.) The homeowner had used a great designer in the past, under vastly different circumstances where budget was far less an issue than it was here. But that meant the standards were high even if the budget wasn’t.

So with nothing but a floorplan, how and where do you start?

I started where every room, whether half full or fully empty, starts: with a conversation: about what the client likes (that yielded “I like dark woods with no reds in them,” and “No green.”), and about the necessary functions of the main space. “Not too matchy” was a frequent part of her vocabulary, posing a potential challenge to creating a cohesive open-plan public space, much smaller than she had been accustomed to.

We settled on “warm modern” as the closest term for the end product. But I also wanted to give her a settled sense in this time of uncertainty, so shapes were a bit traditional, the aesthetic a bit more classical, in spite of a modern sensibility. And, I wanted it to look as expensive as possible, given the circumstances. I wanted her to be happy to come home, to entertain friends, and not feel like this chapter was compromise, financially or stylistically.

Rental Restrictions
It’s a rental, so the usual restrictions applied: no renovation, no new paint, no hard-wiring. But like I’ve said it before, if you work with what’s there, instead of fighting against it or trying to mask it, you celebrate the givens. Those elements of a space that seem limiting at first become the start of something beautiful, and take you down paths you might not have traversed.

In this case, it was not the typical Manhattan “Builder’s White" walls and mid-tone parquet. Color-wise, this carte was a little off-blanche. Pale maple floors, and a golden tone vanilla wall color that, while neutral, already had a definite flavor. But by keeping neutrals warm, choosing warm metals like brass and bronze, and even picking up the yellow undertones with a true yellow in her son’s room, it all ended up looking like Lynda had painted the place to her own spec, not the builder’s.

When money and time are tight, and the slate is completely clean, how do you make the most of the available resources and the design process to turn white-ish box into fully-realized home-sweet-home? Here’s how I tackled it. 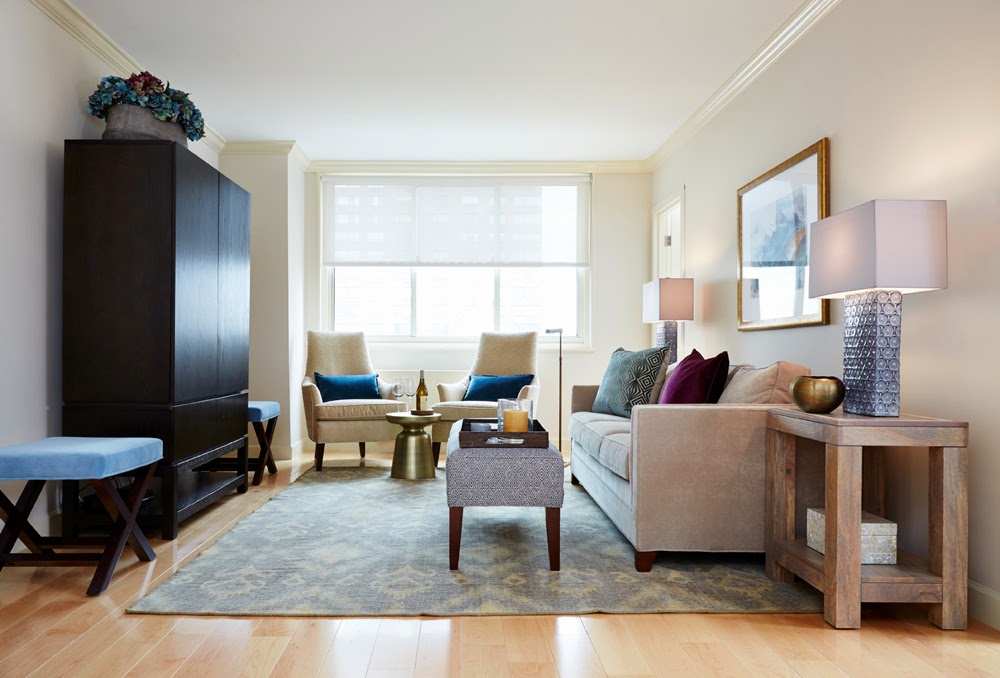 Stock Answer
The best way to move quickly on any interior project is to forego custom, head to a retail source, and focus on the pieces with the longest lead time first, which often means the bigger stuff. And that often means the upholstery.

The way to make sure lead times are kept to a minimum on upholstery is to work with the fabrics those retailers stock the item in. Going with stock fabrics can mean the difference between “get it this Thursday” or “we’ll call you in six weeks.” Here, the stocked (at the time) Metropolis fabric on Mitchell Gold + Bob Williams Dana chairs was an instant hit with— and instant gratification for— the client, and arrived in a matter of days. Whew! Someplace to sit! Same with the armed and armless version of the Crate & Barrel Miles dining chairs. In stock, as stocked. Done!

Think Ahead
This home is a new chapter for Lynda, but it certainly won’t be her last, so pieces picked specifically for here also had an eye on the future. And that meant the largest pieces were kept neutral so they’d work in future spaces. The other reason for that is... 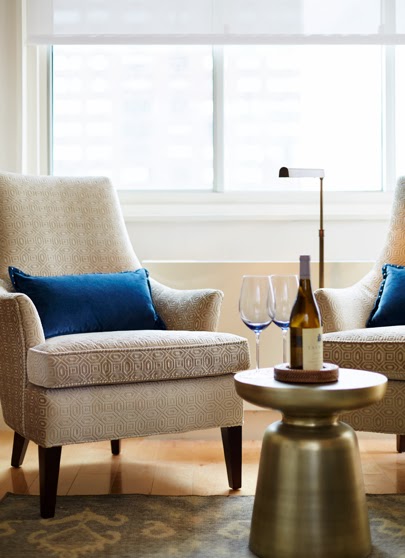 Monochromatic: Right on the Money
One of my favorite ways to make a space look more expensive than the budget is to match and repeat color but change up the textures. Since we were considering neutrals on the main pieces (for those above in-stock and future-life reasons), and since the “envelope” was vanilla, that stage was already set.

Relating upholstery to wall colors (even if, as here, you change the value of the colors... we went more mid-tone than the walls, but stayed warm) is also a way to ease maximum furnishings into a smaller space (a definite issue for Lynda, suddenly down-sizing from an ample loft). And while the room is long, it’s not particularly wide, and needed to handle traffic into the kitchen and her son’s room. 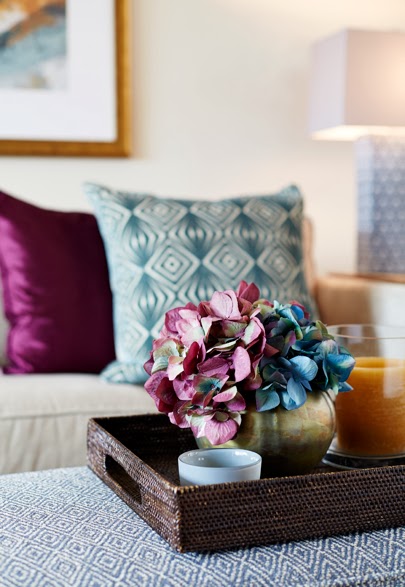 Don’t Dismiss Any Source
When time and money are the priorities, you can’t afford to turn your nose up at any source, and I love that pieces from Pier 1, IKEA, CB2, mass-market internet sources and the sale shelves at Gracious Home made it into the mix. But any source can yield gold when you mine it correctly. She had ruled out some sources early on, but they’re actually here, hiding in plain sight. Mixed sources, a few splurges, and careful choice throughout make it look more higher-end than bargain basement, and keep it from looking like it all came off one truck. 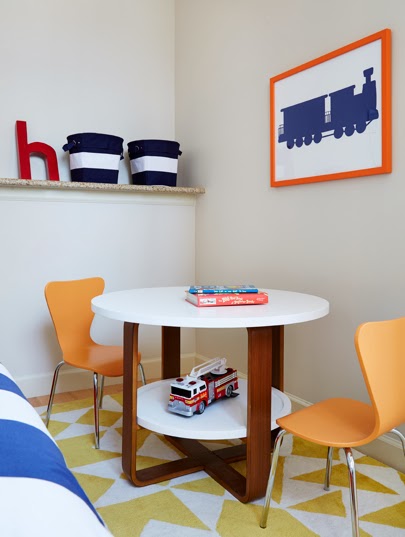 Blind Dates and Allen Wrenches
When money is tight, there will be some pieces you don’t see until they show up at your doorstep. Internet and catalogs are great sources when watching costs, but involve a bit of risk. But I proposed sources I was familiar with, and made sure they were places with forgiving return policies if things didn’t measure up to their online photo. 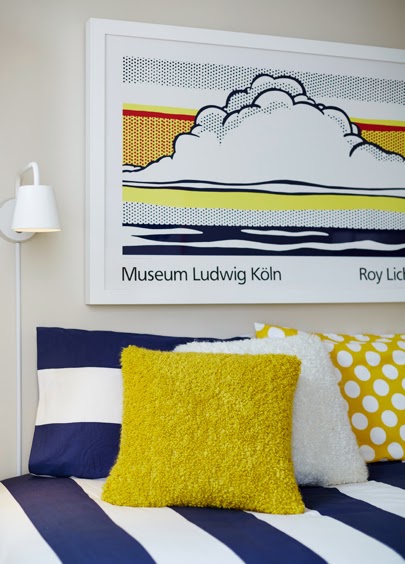 And to keep a project rolling along, and rolling in under budget, someone’s going to have to assemble some furniture. Here, it was the IKEA dining table, the pair of storage towers from CB2 in her son’s room, and the play table from Land of Nod. (Ah, and in this case, it was the designer doing the assembly, part of the “glamorous life” I talked about with fellow blogger/designer Kristen McCory over on her Gild and Garb blog.)

Piecemeal is Dangerous
Because we were filling an empty home that Lynda and her son were already inhabiting, I broke my own rule about saving everything up and doing an “Install Day.” She needed some place to sit, eat, and work.

But I realized pretty early on here that things were not going to go well when each piece was delivered when ready. She second-guessed each delivery, and panicked that she was not going to get the kind of color she was looking for when the first wave of main pieces were mostly neutral. (“It all looks like butter!” she said on more than one occasion.)

So once we had some basic function covered, I put the brakes on deliveries. I saved the last wave so it all happened at once, and more importantly, so she saw things in final context. Yes, that meant she ate off a card table for a while, but it also meant the frequent returns ground to a halt.

If you can’t afford to wait, just prepare for things to feel odd until, well, they don’t anymore.  Or better yet, keep things in boxes and do all the unpacking at once. Context is huge in pulling a space together, and each piece (ideally) relates to the next. It’s like having one lonely guest at a costume party... no one feels comfortable when the first arrival has nobody to talk to. But the guest list— and the costumes— make much more sense once the party’s in full swing. 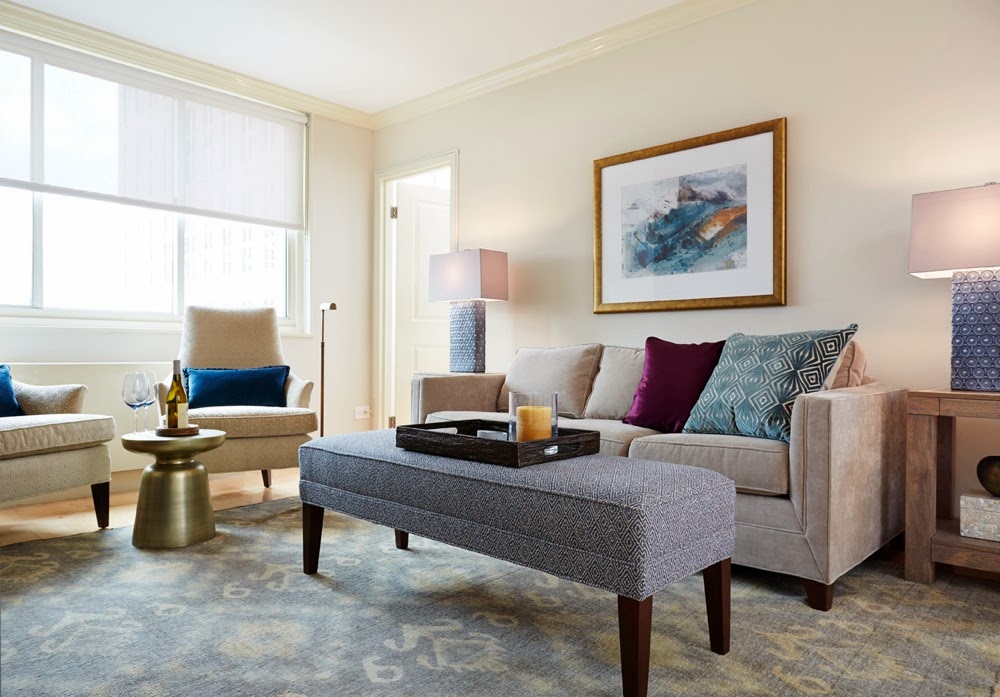 Be Prepared for More Hurdles
The one-bedroom apartment had been converted to two bedrooms (with a temporary wall that could be removed upon leaving), slicing the living/dining El into one long rectangle of living/dining, and turning the floorplan’s dining room into her son’s room. (It also left the odd remnant of a kitchen pass-though on one wall)

That meant we had one long alleyway, from front door to window, to take on all public functions of the apartment: living, dining, TV watching, lounging, work.

It also meant, on that temporary wall now anchoring the sofa, there were no electrical outlets. Not a one, a particularly disturbing discovery after I had personally lobbied so hard for sofa-flanking lamps, from Zinc Door. Thank god for that peel-and-stick electrical cord cover! Up and over the door to her son’s room we went, to get those lamps lit. 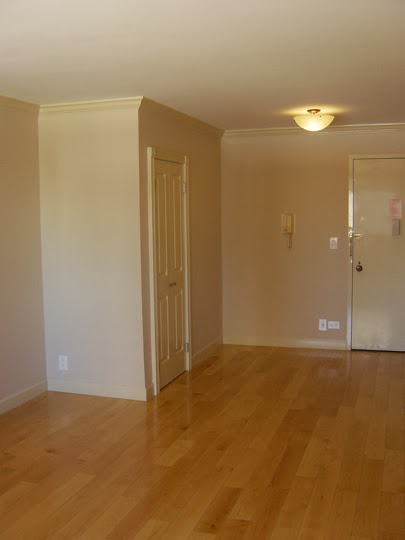 Use Furniture and Stylng to Define a Space
The TV (tucked into the West Elm armoire) had only one wall to live on, which meant it looked like we’d be ending with one of my pet peeves: All the upholstery on one wall, all wood stuff on the other. That ends up looking like a poorly-styled furniture showroom. But that’s what had to happen here.

The best place for dining was right near the entrance, but if we floated the table, it would have literally blocked the entry into the apartment. 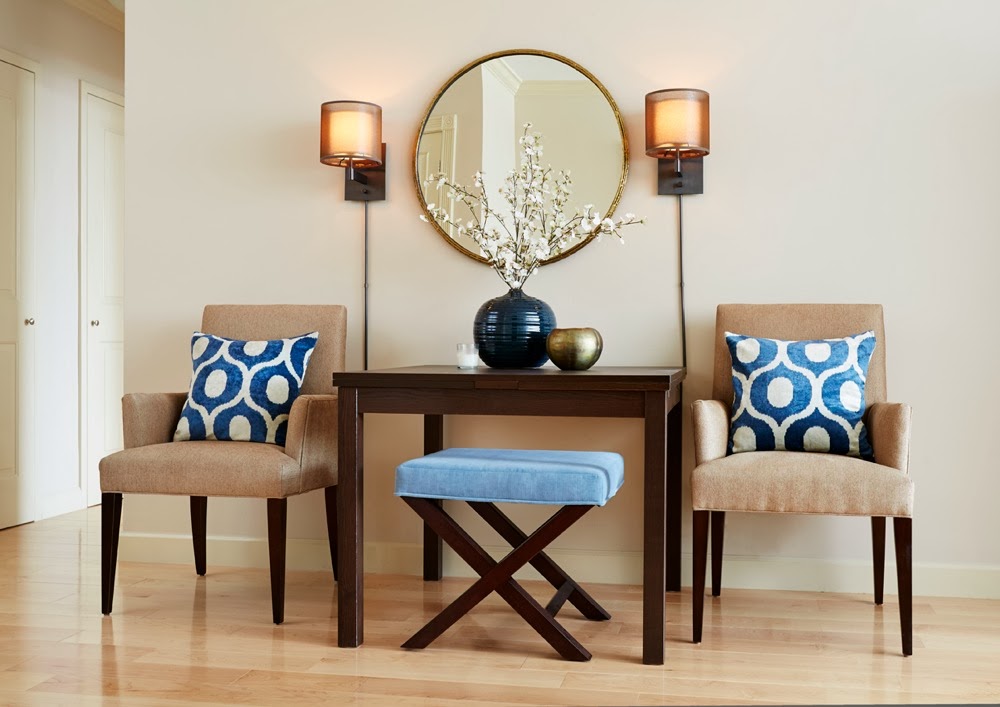 So instead of setting up the dining table to look like dining at all times, it was positioned more as a library/entry table, against the wall. The sconces and mirror created an anchor to make sense of the placement (and the sconces, with high/low switches, were stand-ins for the lack of an overhead fixture), but also made a separate “dining room” where there wasn’t one, and allowed the softening presence of the table’s two arm chairs to break up all the chocolate wood pieces. 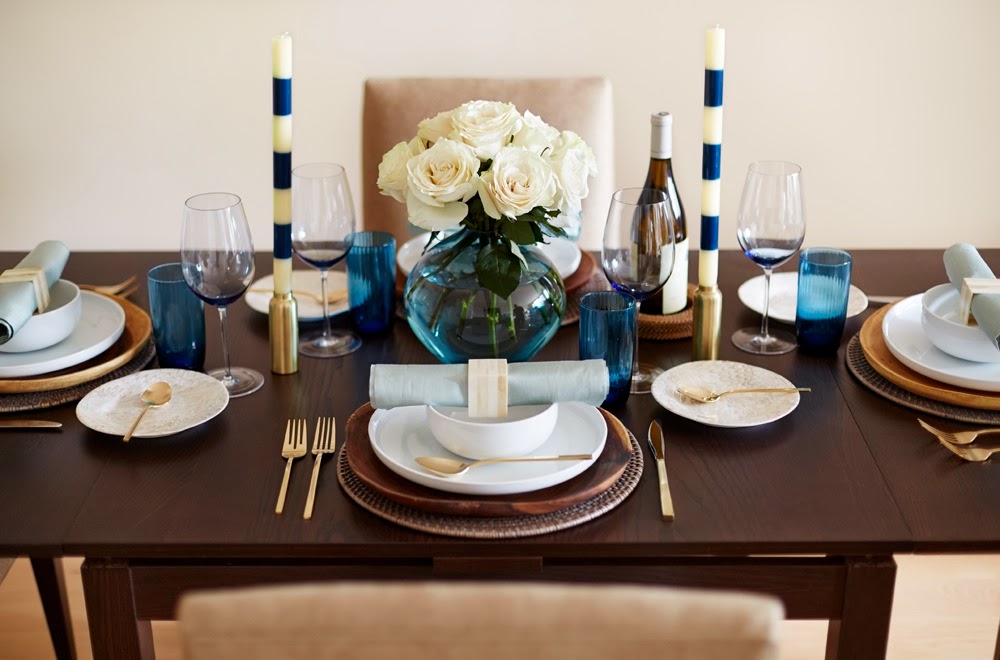 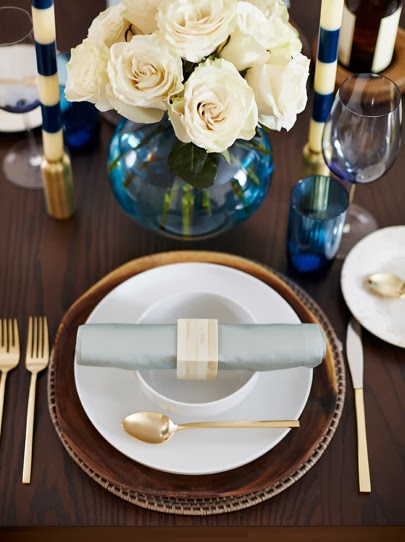 When it’s more than just two for dinner, the clever IKEA table (with self-storing leaves) expands to seat six easily. Armless chairs are pulled in from their position flanking her bedroom dresser to round out the seating.

Trade-offs
When time and budget are tight, you have to steel yourself for the possibility that you might not find the perfect piece for each item on your list. While Lynda wanted a cabinet to house the TV, we didn’t have a huge budget for it. This one came from West Elm, perfect in scale, function, and “non-red dark wood.” The trade-off for the piece’s affordability (and insta-availabilty)? The doors don’t fold completely back or pocket back into the piece as they might on a higher-end version, which threw a wrench into the first idea for a seating plan. But a custom cabinet, or a more engineered piece, would have broken the bank.

In all, and in spite of restrictions, hurdles, a quick calendar and tight purse strings, a home I hope Lynda is happy to come home to.

What are your tips and tricks to starting from scratch?

All After photos: Jody Kivort