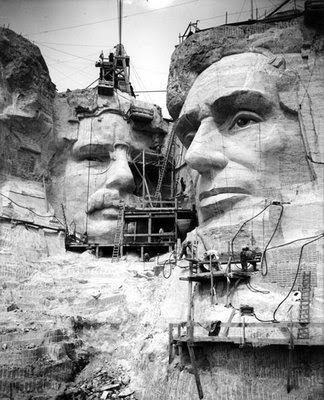 Dynamite, scaffolding, winches, dangling bosun chairs and a temporary city of workers, laborers and support staff, over 400 in number, brought light to some of the darkest moments of the Great Depression, and an American icon to the hills of South Dakota. Their work, and the vision of Gutzon Borglum and the project’s unsung hero, Borglum’s son, the aptly named Lincoln, yielded Mt. Rushmore, an ode to patriotism that still draws almost 3 million visitors a year. A marvel of engineering, craft, dedication, ingenuity, patriotism and certainly, quirk on the grandest of scales, Mt. Rushmore still maintains the colossal nobility of its original intent.

And here, the size is the thing. Of an almost incomprehensible scale, yet rendered with superb delicacy. Remarkably, over 90% of the work was done the Big Bang way, with dynamite removing the heftiest chunks of the mountain’s original granite face. It’s hard to believe such earth-shattering means found such refined result. And it was all PC: pre-CAD, pre computer… although now, a high tech project is documenting the mountain with laser-precision. 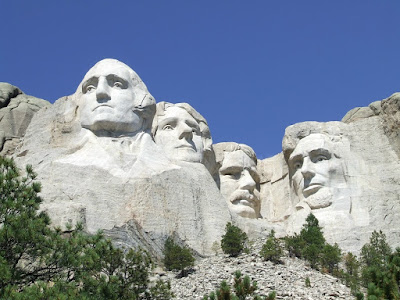 The presidential choices were highly specific, based on the shaping principles their presidencies represented. Washington earned his place of prominence for laying the foundation for our nation’s democracy. Jefferson’s written eloquence, with our Declaration of Independence, secured his place (and also for the expansion of the states on his watch). Lincoln made the mountainous list for his unifying role during America’s Civil War. The Mt. Rushmore site page said it best: “Roosevelt was known as the ‘trust buster’ for his work to end large corporate monopolies and ensure the rights of the common working man.” Sounds like he’d be hanging down at Manhattan's Zuccotti Park with the Occupy Wall Streeters if he were still around. "The purpose of the memorial is to communicate the founding, expansion, preservation, and unification of the United States," wrote Borglum. The traits they represent and made them worth immortalizing in stone held great significance to a younger America, and extra significance now in a country that could benefit, it seems, from a return to these roots.

It’s also not without its sense of divisiveness (a trait of tension shared by the Vietnam Veterans Memorial, and Serra’s "Twain"). There were (and are) issues with the ownership of the original land, a Native American population that still lives in the mountain’s shadow. And it is a bit of all-American hubris, man-over mountain bravado that would no doubt ruffle the feathers of the Audobon Society were an artist to take dynamite once again to the Black Hills of South Dakota. 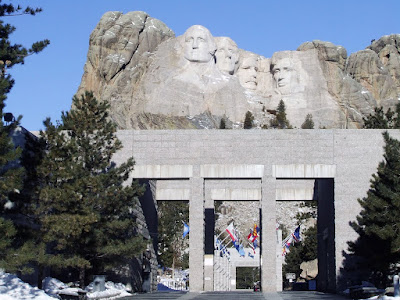 Is it corny? Naïve? A little, and perhaps. But it is also a feat we are not apt to see duplicated ever in our lifetimes, and that is just one more thing that makes it worth note and honor. And not just because they just don’t make presidents like they used to. This mountain is worth visiting. And the principles of the men it monumentalizes are certainly worth revisiting. Perhaps now more than ever.

Why are public art projects still so important? They create dialogue. They create points of pride. They encourage debate. They bring beauty. They help us honor the fallen and honor our neighbors. And sometimes, they pull us toward one big communal fire, as the stars drift overhead. There’s a lovely art to that.

What permanent public art would you add to the list? And feel free to blur the lines on your own definition. All good art does.

More on the topic:

An interesting article on how scale contributes to the success, or at least impact, of a piece of public art can be found here. ApartmentTherapy took a great look at public art, most of a more fleeting, temporary nature, here.