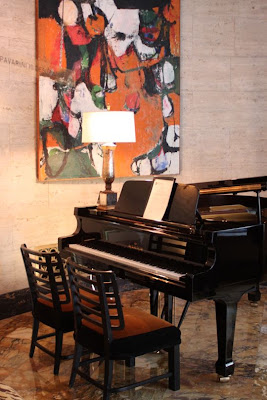 Some of my favorite moments in show houses are exactly that: moments. A bit of art or room glimpsed through a doorway… a tiny space made grand… a perfect light fixture… a showstopper painting. And there are more than a few here, at the 2011 Holiday House.

Charles Pavarini’s “Opening Night” moment, a celebratory tableau (bon) vivant tucked beneath a grand sweep of staircase is one of them. Just a few pieces paint a vivid picture, a place to gather after an opening night success, martini in hand. 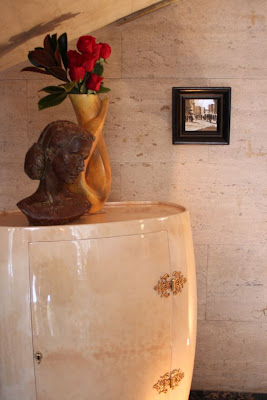 A stunning, grand-in-every-sense-of-the-word (and high tech) piano (paired brilliantly with two Jean Michel-Frank chairs, for the perfect Brothers Gershwin collaboration), a brash swath of art (against given limestone walls), and an elegant cabinet, sharing a mirror-like ivory to the piano’s ebony, hold their own against the space’s architecture and circulation. The piano’s notes flowed through the house and set the party tone even during a daytime preview, so fitting since Pavarini is the event’s designer event Chair. 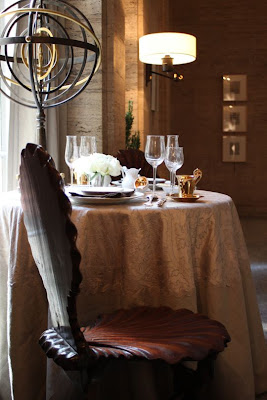 Also a moment made perfect, in a space and for a holiday somewhat less than, was Bryant Keller's, of Bryant Keller Interiors, take on Columbus Day. A stairway landing/hallway, and a holiday not necessarily known for its decorative sense came to lovely life and managed to enchant with muted color, a stairway-sweeping grisaille mural, drop-dead shell chairs, and exquisite tabletop styling. 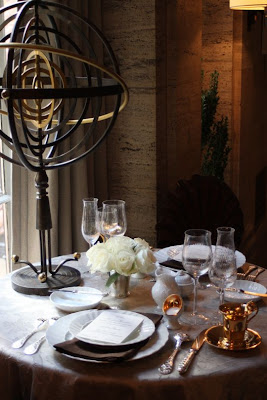 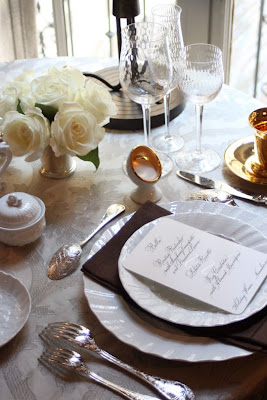 One can almost see Mr. Chris himself making the pitch to Isabella to fund his travels, across this very table, in the glow of candlelight and one more glass of Rioja. 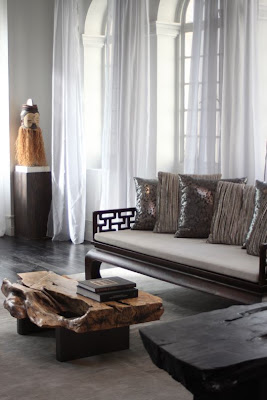 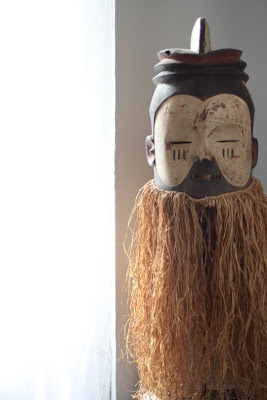 Also taking a subtle hand with color, but in a far larger space, was penthouse designer Aline Matsika, with silver, black and white. The space apparently required some major reworking (like flooring and electricity) before the fun stuff could happen. That fun stuff came in in the form of Aline’s signature modern organic touches and African artifacts, against billowy white floor to near-ceiling drapes. 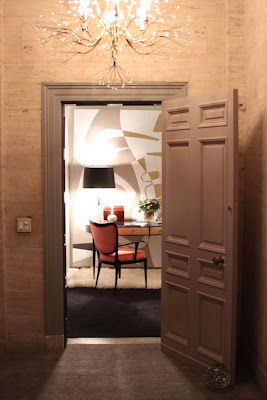 In a showhouse, there is no such thing as a throw-away space… just the potential for missed opportunities… and Dineen Architecture, like Bryant, made the absolute most of a pass-through space with her “Roman Holiday,” and didn’t miss a trick or the opportunity to tell a story. Perfectly framed through a doorway leading to a more major room, the small intimate area was defined only by desk, chair, lamp, flokati rug and wall-filling custom painting. 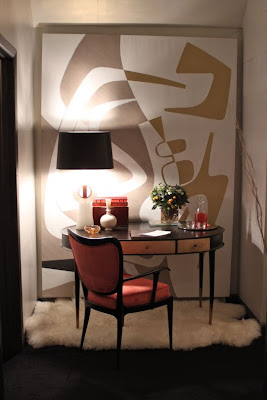 A corally-cognac color (a tamer version of James Rixner’s red and Inson Dubois Wood’s lacquer) on chair and styling details made the tiny space glow, beckon and seduce. Inspired by the Audrey Hepburn film and envisioned as a space where love letters flow with the Campari, it was one of my very favorite vignettes, a romantic story itself told with just a few carefully-chosen notes. 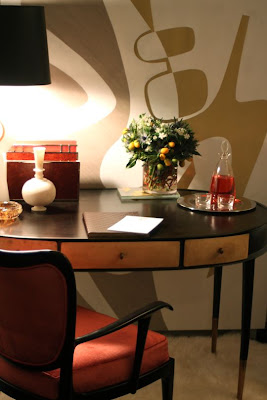