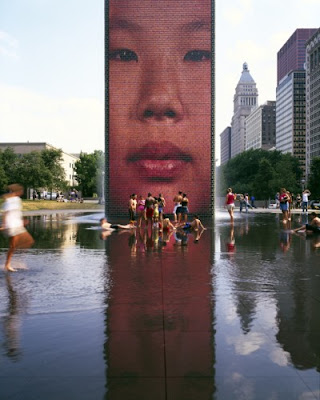 Photo: Hedrich Blessing
Each day this week, I'm looking at my list of top public artworks, and the traits they share that make them great.

The kids who have been here all afternoon know when it’s coming, and press up against the video wall or run out into the direct line of fire on some secret timetable. Then, as a giant face looming above them closes its eyes, a spout, spray and tide of water wash away the cares of anyone within squealing distance of Chicago’s Crown Fountain (the second appearance of a piece from Chicago’s Millennium Park in this little list). It is a watery, wet cycle repeated many times throughout the day, and the kids have it timed to the second, although the adults seem to have no clue to its cascading tides. 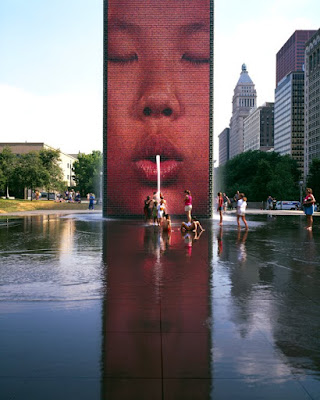 Photo: Hedrich Blessing
The sound of their happy shrieks and loud cascade of water become important parts of this totally contemporary piece of public engagement, snaring yet another sense in this engaging piece by Spanish sculptor Jaume Piensa. It is the silly grandkid to the regal Buckingham Fountain (itself a worthy destination deserving honorable mention on this very list) just a short trek away, another grand and watery marker of time.

Like its other neighbor Cloud Gate, it possesses a sense of silly that is an addition to the beauty of the piece, not an override. If you took away the water, took away the kids, this piece would still be striking, hypnotic, captivating and totally modern. The giant faces take on the presence of some sort of wise Elder Council. They are a calm and serene series of guardians and representatives of the city, with a patchwork of age, skintone and facial trait that celebrates and reflects the slightly wetter patchwork scampering at its base.

But in all its crowd pleasing, it never becomes Disney-fied (not that that’s a bad thing), due to the heroic scale, debt to cool video technology, a bit of hard edge and the serene parade of faces, spouting water like the gargoyles they are meant to harken. Fitting, that reference to a city so indebted to architecture and the building arts. 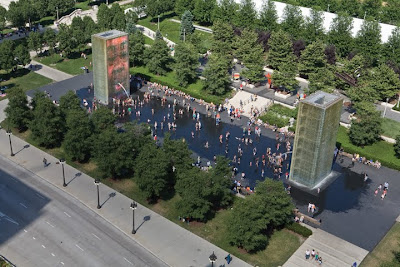 Photo: Cesar Russ
It is a remarkably formal structure for such a modern monument: two spare 50’ towers flanking what amounts to a 232’ foot reflecting pool between them. Those faces are high tech versions of fountains owing much to the spitting lions and spouting dolphins of classical design. But with references to history (instead of slavish duplication) this a public formality for a new age.

Part of my respect for this piece also stems from the respect given it by its creators, guardians and visitors. In our nervous, litigious, overly-insured age, there are minimal signs of warning, it is not overly patrolled, and it is kept clean and safe by a citizenry that is stoked by civic pride, not admonished by “No Littering” signs.

Like WaterFire, it is a beautiful deception, making unwitting convert of people who frown upon or fear Art, or bemoan the diversion of public funds into such works. Maybe they do realize it, but are just too busy toweling off a happy, wet and exhausted daughter, son or grandkid to care.