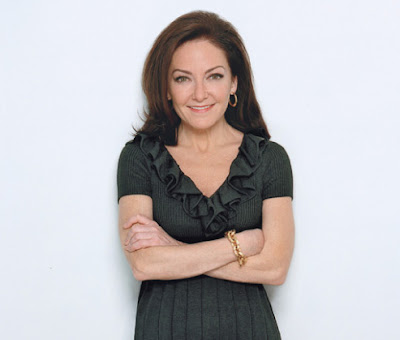 She is a big deal in a small, impeccable package. Margaret Russell, current Editor in Chief of Architectural Digest, led the charge on the D&D Building’s Fall Market presentations “Transcending Boundaries in Design,” with her morning key note, an airy and engaging presentation full of smart and savvy advice. Her vantage point, currently atop the masthead of the shelter world’s grande dame, made her uniquely qualified to talk about boundaries, transcendence, identity and change.

It was no surprise to hear her say, “Reinvention takes work.” But surprisingly, she admitted change doesn’t come easily. “I hate change,” she said, with distinct lack of apology. Her confession got an almost audible sigh of relief from the slightly-sleepy audience. It was a breath of fresh air to those not-always-early adopters who felt technology has been passing them by with trends, Tweets and Likes, and those who assume the only way to get to the heights of Ms. Russell’s print and TV career is to run with change like a twenty-something. But, she went on, change is a given, in a world which morphs around, and out from under us. But her own way to cope sounded every bit plugged in, “I’m in ‘perpetual beta,’” a term destined to go viral before the last Q was A’d. It was the perfect phrase to capture how Ms. Russell has helped freshen the AD brand (and, she noted, it is every bit a brand as merely a magazine): stay fluid, stay focused on improvement, and never assume you are in the final version of anything.

That change she sometimes dislikes is coming fast to AD, and in some globally and essentially big ways: AD India will follow the brand-new AD China (“As thick as a phone book,” one AD insider later sighed, a comment on the thin spines of some US pubs, theirs included), and the Digest launches its very first PDF version, first to Kindle this spring, with a Nook version shortly after, perhaps giving Rue and Lonny a run for the Older money. It was an interesting statement on the heels of a comment that people covet and collect back issues, even heading to eBay to do it. 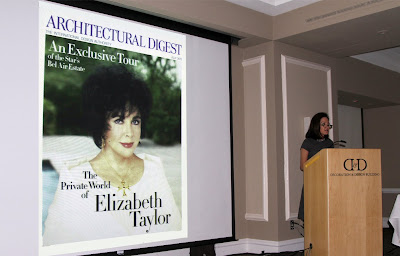 Some of the fluidity of the work surrounding Russell’s AD comes from the migration to electronic media, and the unprecedented and immediate access social media and email has created. Feedback is personal, real and immediate, even if not always glowing when such a familiar, public and venerable brand is at stake. But Ms. Russell understands the responsibility that comes with the all-access pass electronic communication affords… changes have been made to the book (magazine speak for, well, “magazine”) based on reader feedback… a slew of somewhat cranky emails saved the annual Country Homes issue, which will return next Summer, as just one example. It’s an acknowledgment that although she has a decidedly vested interest in AD’s success, she is more guardian than outright owner.

As brand steward, Ms. Russell talked about her migration of an AD often characterized as “formal and frosty,” to “sunny, fresh” and “relevant,” a word that trended high during Ms. Russell’s presentation. She dove into the challenge first by looking back—into archives, past issues, and what she calls the magazine’s DNA… a favorite term of branding gurus— then forward… to technology, new markets, all in an attempt to reconnect with the audience that has always had at its center “a fascination with how other people live.”

Ms. Russell stated that she felt part of that DNA was “the interface between reality and inspiration,” another role she doesn’t take lightly. To give the magazine a dose of relevance, it was more about style of presentation than a redirect of content… there will still be the design porn of rambling country estates, gracious chateaus and Upper East pied-a-terres. But these still-classic interiors designed and shot by names long familiar to AD readers are more casual, with open doors, sunlight and the true-to-life appearance that shooting digitally now affords. (We learned that lesson from none other than frequent AD shooter, Scott Frances, and indeed, Ms. Russell used Scott’s own images to illustrate how digital technology allows them an outcome that’s closer to fresh feel than cold-hearted exactitude, in this publication that was one of the last holdouts in accepting digital files from its photographers.) Oddly, one tool Ms. Russell will be using to warm up AD is snow… they will be rolling out their first snow-covered images in December. 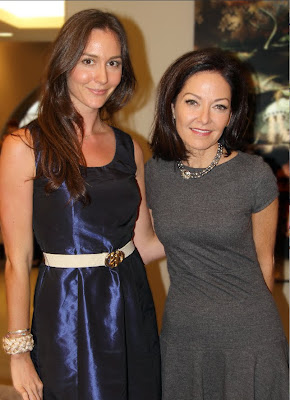 Margaret Russell, with the Decoration and Design Building's Ashlee Harrison; Photo courtesy the D&D Building and Editor at Large

This publication that used to boast they would “show up and shoot” (without a stylist or florist in tow) now opens the doors to tweaking under Ms. Russell’s watch, especially for the sake of a cover, which she admits is more business than art. Flowers and throw pillows are sometimes switched out and colors bumped up to garner more eyes on the newsstand, still the publishing world’s big driver right behind ad page count. Ms. Russell said the tweaks were a matter of “taking liberties, but staying true to the intent.” And she spoke passionately about wanting to reshoot an image because the scale of the space was lost in a too-tight photo crop, all in the interest of conveying a space’s quality.

Staying true to the magazine’s intended DNA means there will still remain a focus on architects, and that familiar departments are getting typographic re-dos and new names, mere shots of Botox, not full facelifts. It also means reader-favorite features like floor plans will be published unless privacy issues prevent.

In the Big Change department, AD will now publish a full Sources list for the first time, a step Ms. Russell realizes tears down some of the barriers in between inspiration and reality. It’s also a user-friendly detail that will no doubt add robust content to their future online and PDF incarnations, a lesson perhaps learned from the online upstarts and the now-shuttered Domino. 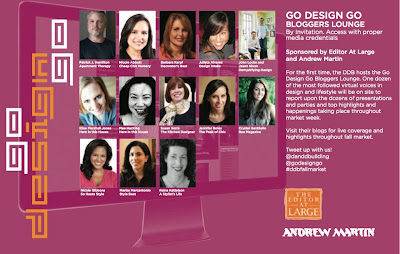 I had the pleasure of joining fellow bloggers in the D&D Building's Bloggers Lounge, covering their Fall Market preview.

What won’t be changing, any time soon? Celebrities on the cover, like recent cover girls Ellen Degeneres and Jennifer Aniston. Why? Aniston’s cover broke previous AD print sales records, and Ellen’s cover generated a huge spike in social media buzz, Twitter trends, and visits to the AD website. These two kinds of stats show the two faces of magazines today, and in timelines and mindsets that couldn’t be more different… the months-in-advance cycle of print, and the daily immediacy and content hunger of online vehicles.

After showing off some images in the next issue to gorgeously illustrate the concept of classic but refreshed (a drop-dead and cliché-free lodge was an especially memorable example of that familiar-but-fresh perspective), Ms. Russell turned the focus to the audience of designers and entrepreneurs, taking her own AD brand journey and applying the concepts learned to their professional design careers. Her main message was at the very base of Branding: Get your story straight before you expect anybody to buy it. She spoke about the building blocks of doing so, from a starting point of understanding your corporate identity (in as basic a detail as business cards, which warmed this former graphic designer’s heart). Her other tips were refreshingly yet deceptively simple: “If you aspire to television, invest in media training,” and that the heart of your web strategy should be “clarity and beauty,” not bells and whistles. “If you give them a ‘skip intro’ option, they will take it.” 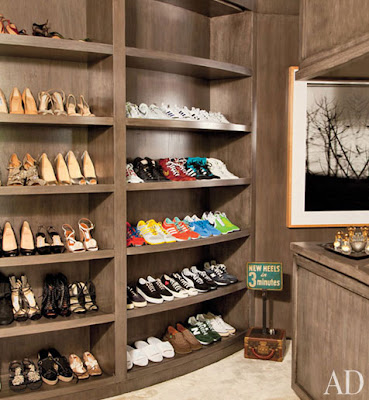 Back in the closet: Ms. Russell showed the closet of Portia De Rossi and Ellen Degeneres as featured in their record-breaking October issue; Photo: Roger Davies for Architectural Digest

Ms. Russell also acknowledged it’s often as much about protecting a brand as it is creating it, and managing the negatives as well as the positives. “Watermark your images,” Ms. Russell cautioned, noting how easy the online world has made it for images to wander far from their rightful owners. With her own humbling anecdote about once having to buy back the rights to her own name as a URL, her advice to “register your name, as a URL and on Twitter,” carried true weight.

For those in the audience hungering to have their personal design brand splashed on the glossy pages or shiny iPads of AD, Ms. Russell gave a tip, and an opportunity. As far as getting published, exclusivity is still key: they won’t publish anything that’s appeared anywhere else, including online portfolios and blogs (and I heard the same thing before from Managing Editor of Interior Design, Helene Oberman and former Style Director of House & Garden and Executive Editor of House Beautiful, Carolyn Solis. Even design legend Melvin Dwork told me a similar story later in the day about his own project being rejected when pictures surfaced elsewhere, on the watch of past Editor Paige Rense.). But AD is once again repeating its “Open Auditions,” a coast-to-coast cattle call to find the industry’s undiscovered thoroughbreds, proving they’re not opposed to adding to their list of design heavy hitters with fresh talent. 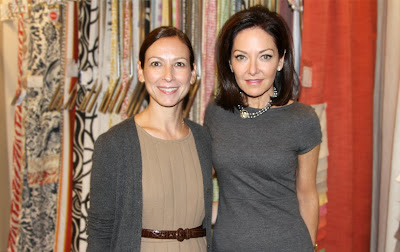 What were the true surprises of Ms. Russell’s morning address to the troops? Her advice of “Don’t be all things to all people,” seemed slightly counter to a world where even her own magazine needs to be equal parts paper and plastic, and careers need to be organic and multi-faceted in order to survive an economy which Ms. Russell accurately summed up with “Business has a been brutal,” a comment which got more than a smattering of deflated nods from the capacity crowd. Another was the stat about the gender of the AD audience: nearly half of her readers are male… in a world that typically skews 85% in favor of female readership. Perhaps that’s why AD still shows more boytoys like Ferraris in Beverly Hills driveways and yachts on the Mediterranean than Manolo Blahniks scattered at the foot of sofas and bed frames.

To an interior design industry, and within the halls of a to-the-trade building which both wrestle with invention, the economy, definition and boundaries themselves, there were some moments in Ms. Russell’s keynote that seemed to point out the disparity between top-tier and entry level, and revealed “relevance” to be highly relative. Ms. Russell encouraged a $5,000 to $10,000 investment in a web presence, and said, if you need to stay on top of social media, “Have someone on your staff do it.” To this sole proprietor, that top-end web investment number, and reliance on staff, seemed way more aspiration than reality. But, with a business card I’m super proud of in hand, and my own URL rightfully mine, a boy can dream.

Proving that Ms. Russell’s AD has kept in touch with the state of current affairs, and acknowledging that a desire for good design has perhaps sometimes outpaced the economy, she promised Architectural Digest will remain all about “taste, not pricetag.”

Get social: You can find Architectural Digest, Editor at Large, Scott Frances, the DDB | Decoration and Design Building and Go Design Go on Facebook.